This weekend I have been trying to get to grips with Philip Sabin's Lost Battles. The book has a walk through of the battle so gave it a go. I first came across Philip Sabin's work whilst at uni a few years back now, on JSTOR I downloaded and read The Face of Roman Battle. It is a fascinating article and was eager to get hold and read Lost Battles. If you are interested in ancient warfare I highly recommend the book even if you have no interest in the model itself, there is a wealth of information in there.

I took to the internet looking for guidance and inspiration on gaming it with miniatures. The yahoo group is a great help and Board Game Geek site have some great resources. I was mostly helped and inspired by Aaron on 'Here's no great matter' and his great youtube videos, Lost Battles: Trebia with miniatures. These have helped me greatly to get going with the rules!

The pictures below of the battle leave a lot to be desired but hopefully do the job. The battle needed wrapped up so some of the events did not get a picture. In the future I should have more time for pics as I get used to the rules.

In Lost Battles expending commands is the main driver of a players turn and I knew I would (and did) lose track of commands. I knocked up some chits using 20mm square bases I had lying around. I left them blank but for the commanders' exceptions I marked them with E and attack exceptions with AB. I think overall I played the rules correct with only a couple of things missed, forgot to give flanked squares an extra attack sometimes. Also the river is missing but I observed the limitation it caused to the attack limit in those zones.

I tried to follow the deployment as described in the book as close as possible although Hannibal had received less command than in the book but only meant that the all three Carthaginian heavy infantry were left in the centre rear section.

The Battle of Cannae 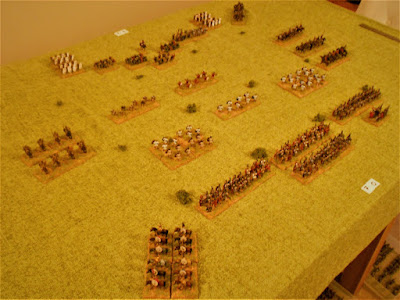 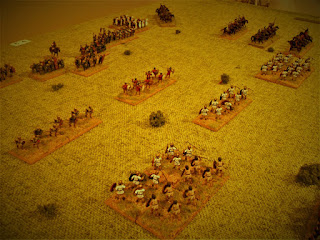 The battle opened with ineffective skirmishing between the opposing lines, whilst on the Roman right flank by the river the Equites rode hard to inflict an early blow to Mago's Gallic cavalry. The Gauls were unmoved and Mago countered with his Iberian horsemen, veterans of the Barcids campaigns, sent the Equites reeling off the field though Mago's horsemen had pressed the initial attack and casualties had been taken. The Roman battleline continued on expecting the Equites to quit the field early on. On the left the Italian Allied cavalry lead by Varro held back protecting the flank and inviting the Numidians to attack. 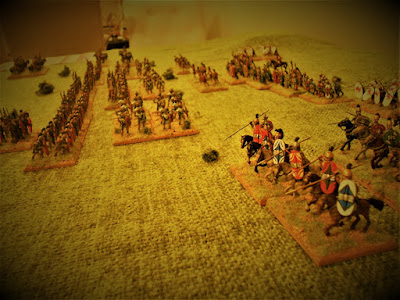 The main battle lines closed the skirmishers, worn from their duties, were recalled on both sides to take shelter behind the heavy foot. The Roman Legions then proceeded to press on and pressure the Carthaginian line comprising primarily of Gauls and some Iberians. The Roman formation was deep much deeper than the Carthaginian line but the Romans struggled to make head way, though the Legions on the left exerted themselves inflicting losses on the Carthaginians significantly weakening the Punic right so much so even the African veterans were becoming concerned. 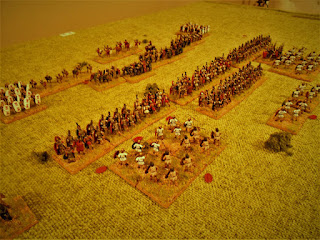 The Carthaginian centre was slowly being ground down, but their left was resolute and even inflicted reverses against the Legions. Mago lead his heavy horsemen around the Roman right flank hoping to inflict losses to the Roman right to sap the morale of the Legionaries in the centre. The Numidians after giving and receiving blows eventually drove Varro and the allied cavalry from the field and gave chase. Hannibal's beleaguered centre saw some Gauls take flight unable to with stand the Roman onslaught despite Hannibal's personal example of bravery in the face of the Romans. The rest of the Carthaginians stood firmly confident in their commanders plan. 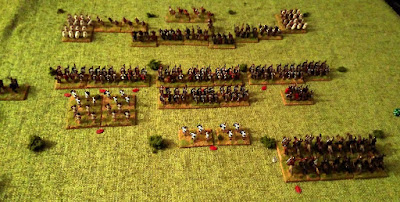 The Roman left because of their previous efforts were winded and could not quite prevail over the Punic line and now the Numidians threatening their rear scattering the sheltering skirmishers. The Legionaries, still holding on, were then confronted by a column of African veterans in their captured Roman arms. The hardened veterans broke through the Legionaries and their comrades broke with them. The rest of the Roman troops held on in the centre though the skirmishers panicked. The Roman right held also probably unaware of their comrades' rout as they were contending with infantry in front and cavalry behind. They withstood several waves but then broke.


The Roman centre being lead by Paullus were fighting to break out and the Punic centre had retreated to prevent collapse. The Carthaginians then went on to surround the Roman centre sending the still fresh Celts and Iberians to intercept the Roman inevitable advance whilst a detachment of Gallic cavalry and veterans assembled on their flank. The Numidians and veterans to the other flank. Mago and the bulk of the cavalry to their rear. 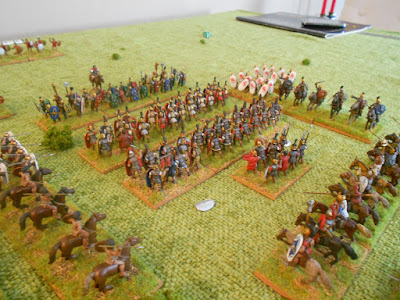 The Romans resisted still inflicting blows to the fresh troops to their front some running away in terror, Hannibal brought up the regrouped centre to prevent the Romans breaking out. The remaining Romans had attacked with great ferocity sending another unit running and then another only a few remained to fight on owing to Hannibal's continued personal example. The Carthaginians despite the last throws of Roman resistance stood their ground, proceeded to break the trapped Romans and begin their cruel work.


It was an interesting and tense game. Enjoyable as a solo game also and I am looking forward to another game at some point. The Roman Legionaries are tough to beat they took some hammering to break, if they had not been surrounded they would have continued the fight on the wings. Overall the Carthaginians had higher command rolls and were able to give out more attack bonuses whilst the Romans suffered a few low rolls but still managed to beat back the Gallic and Spanish infantry. Hannibal's morale bonus really helped keep the rest fighting. If the Romans had higher command rolls and Hannibal lower the Romans might have just won it. The last few rounds the Romans got some good rolls and the attack bonuses posed a big threat to the Punic army, the last Roman attacks inflicted a hit and then a double hit Hannibal negated only one.

The battle lasted longer than in the book's play through and I don't think I used the 'flipflop' of the turn order that Hannibal could use efficiently enough. I only pulled back the centre and swept round with the heavy cavalry. At the time it was the best thing to do the centre was on the brink and Hannibal needed some results from his cavalry in the next couple of turns. He got those and still the Roman centre held until it took a shatter in that zone. I am sorry I didn't work out the VP results I lost track and status of the units in the rush to get it finished.

I would of liked to have used more of my collection but I need to finish more light infantry and cavalry units.