The start of my Republican Roman army in 20mm by Newline Designs (Hastati & Principes advancing). I went for a mix of armour types but kept the same weapon types on each base. Initially I planned to mix the pilum wielding poses but then opted to keep the overarm poses and under arm poses separate, I felt it looked odd to mix them for some reason. I went for mainly white tunics and a mix of colour shields and I am pleased with the outcome.

These have been done for a few weeks now but only just managed to get the pictures taken. This was mainly because I was trying to catch a nice day as I wanted to try photographing the miniature outside. It was partly cloudy but I preferred the pictures I got whilst the sun was out so next time I'll hold out for a sunny day or at least a brighter cloudy day.

Next up continuing with the same army I am preparing some Velites. Using the same sized bases (60mm x 40mm) but using 4 figures per base in open order to represent light infantry mainly for Lost Battles. 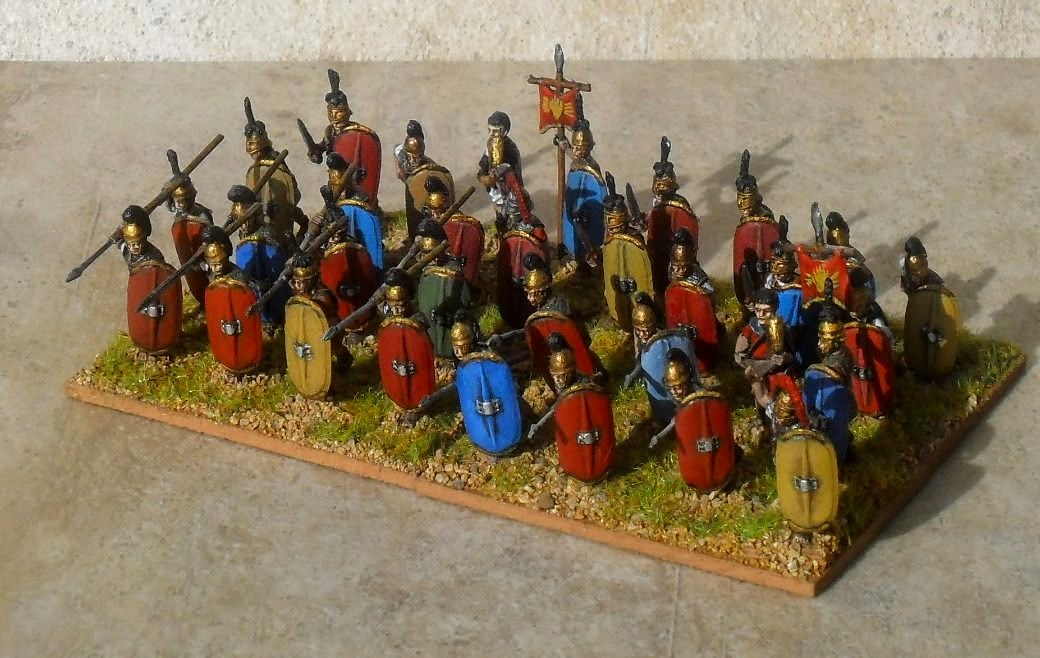 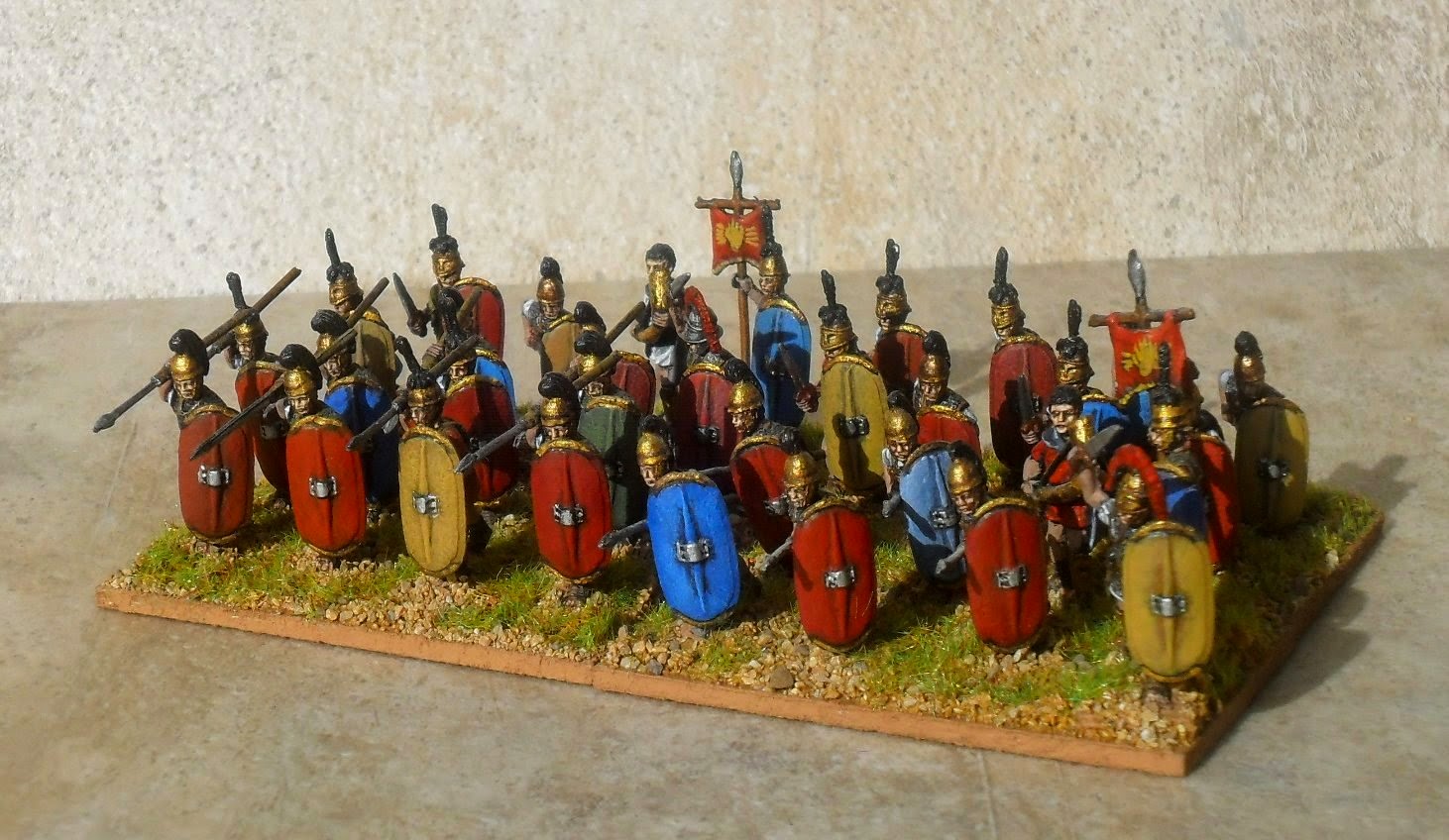 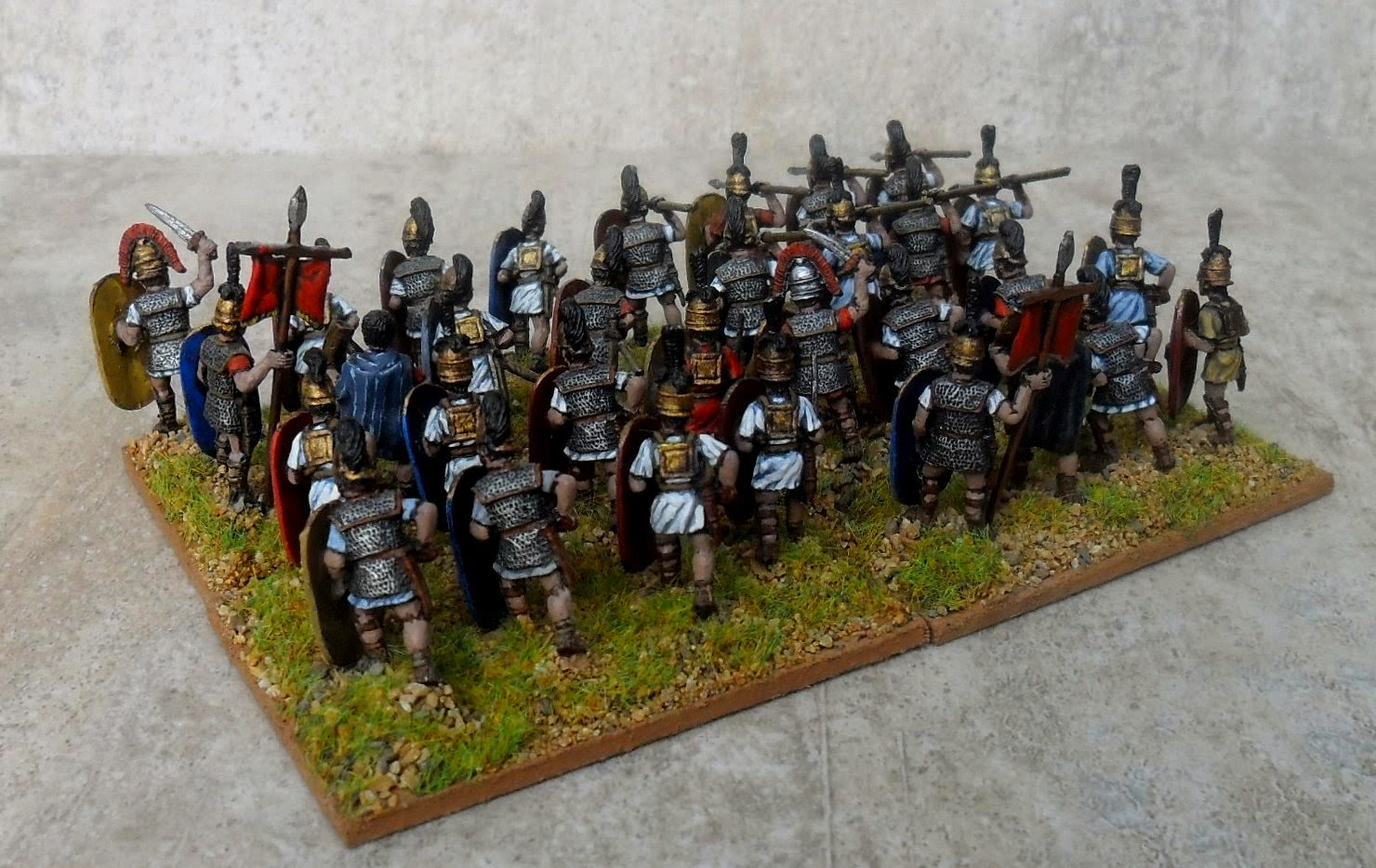 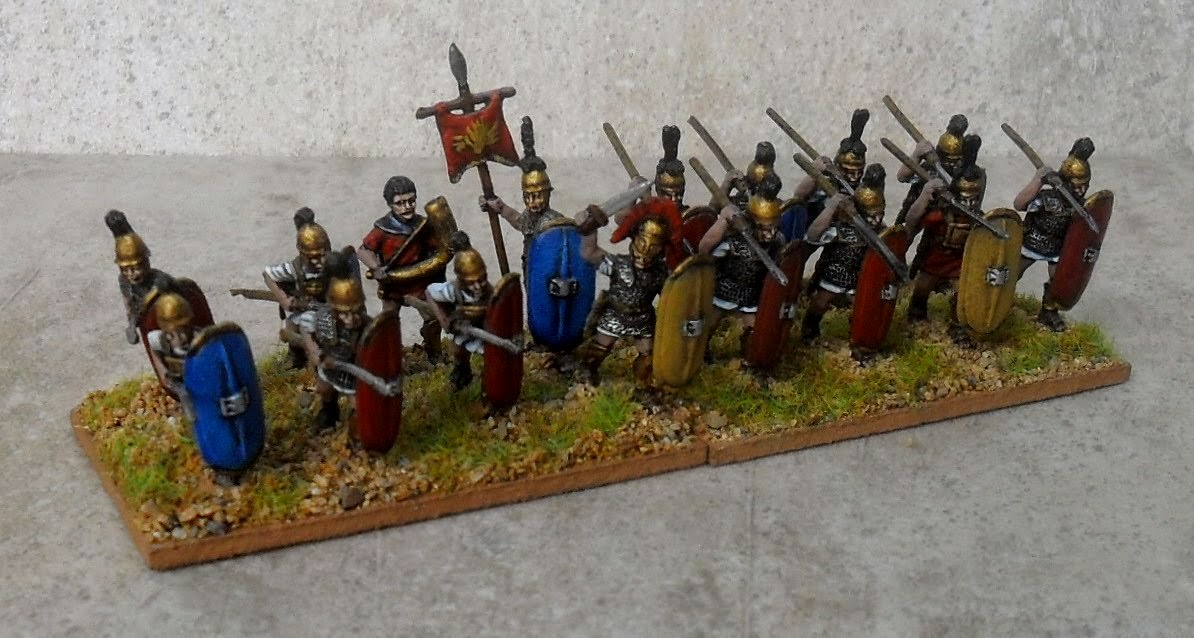 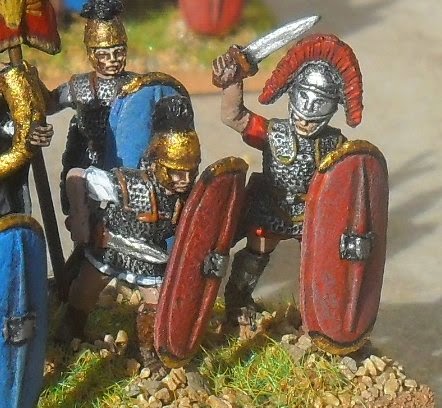 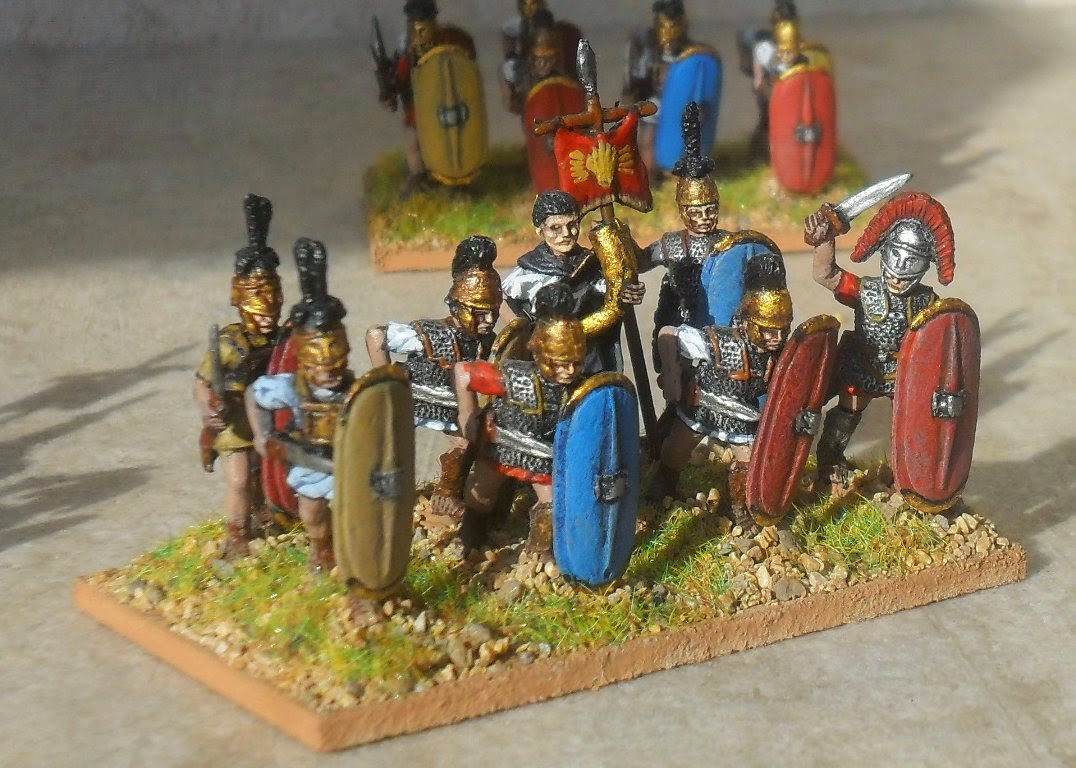 Finally finished some more miniatures. This time 20mm Newline Iberians, they have been finished for sometime but my computer has been out of action. The Iberians provided mercenaries for the Carthaginian but it was during the Second war with Rome that they became a major part of the Carthaginian army that invaded the Italian peninsular with Hannibal.

For practical reasons I have decided to now base my miniatures on a larger base. I think this looks better and makes it much easier to move them around. I also decided to spend a lot more time on the shields as with most ancient figures the shield covers most of the body. They had to look better than my previous shields in which I painted a flat colour and at most gave them a brown wash. As with my cavalry units I tried to introduce variety in colour of tunics, helmets and the shields of course.

I have quite a lot more Iberians to do however I may have a slight change and start with the Republican Roman Legionaries once I work out what scheme to do them, So far I am going with 8 figures on a 60mm x 40mm base, 2 bases for a "unit" thus one base will have 2 or 3 command figures (centurion, signifier and possibly a musician) and the rest legionaries. I need to decide whether to mix figures in pectoral armour and mail as well as mixing sword and pila poses? Then of course there is the issue of colour scheme. so far I'm looking at mostly white/off white tunics with a few reds, but with the shields I'm not sure whether to have one colour for the unit or have a mix again?

These are all aesthetic decisions as they will be for either Lost Battles or Impetus so command figures, weapon/armour types do not really influence the rules in the same way as WAB would for example. It seems like Romans just like to take over and dominate everything so here are the pictures of the Scutarii the post was supposed to be showing! 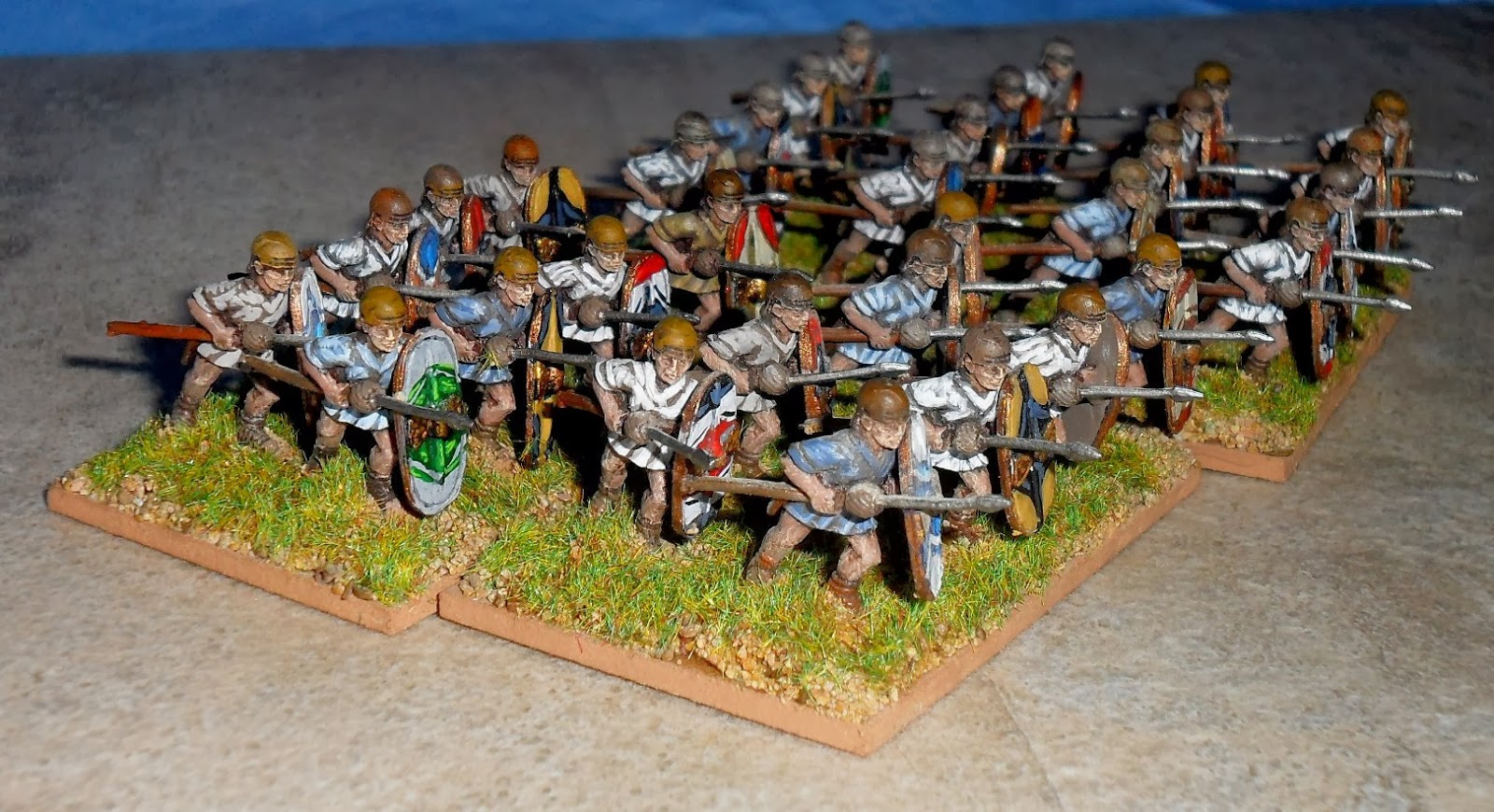 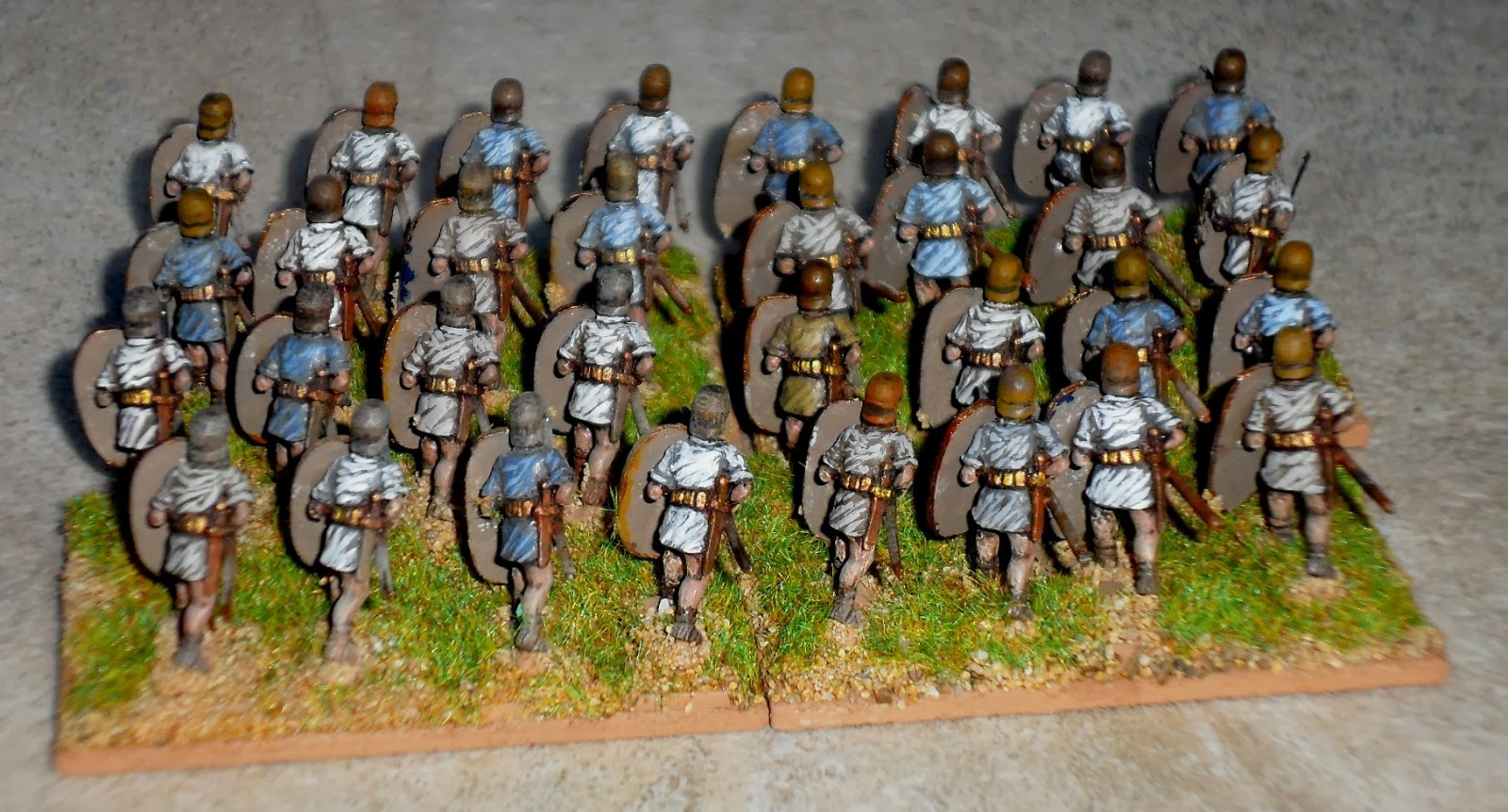