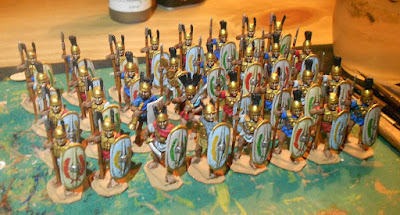 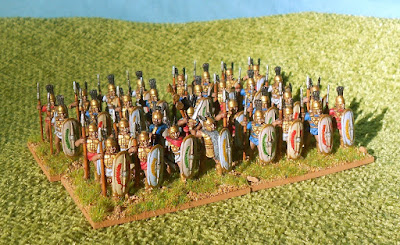 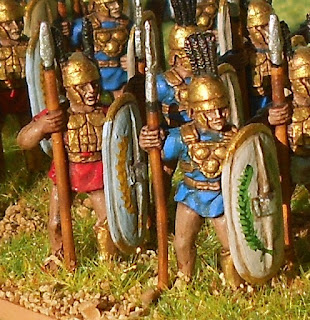 The latest unit to the Legions of Rome or the mercenary contingents of Carthage. This contingent has been represented with Newline Designs 20mm Samnites standing. These miniatures come issued with clipped Scutum shields and I believe they are supposed to be the Samnites of the earlier wars Rome fought with the Oscan peoples of Southern Italy. However I'm going for the later 2nd Punic War era and issued the troops with a Roman oval Scutum shield.

They come in 2 varieties and there is a 3rd standing pose in the Samnite range. The details are very crisp, they painted up easily and then lent themselves well to the mud wash.

I initially attempted to paint a variety of shield designs but the only one that was half decent was the laurel wreath design. The other designs I wasn't pleased with so to introduce variety I just used different colours.

With the Italian Allied Cavalry I swapped the standard with a vexillum but it looked a bit awkward at the join. This time however I went for disks which I think maybe a more Imperial Roman type of standard but it was an easy option to add to the standard. The trickiest bit was cutting the tiny disks which are cut from a cross section of a Hat sprue then super glued on.

Again I undercoated with flesh to save time, which it did, but it still felt like a chore. Fortunately the rest of the painting was more enjoyable and I have a painting guide on my workshop blog. I tend to prefer more active poses however paiting and basing these models I have come to appreciate the humble standing pose they were a breeze to base and there are no spears hanging over the edge of the base.

I have 2 x 32 man units of Samnite foot advancing ready to paint up. However the thought of undercoating my next units was putting me off continuing so I decided to give Army Painter primer spray a go and have ordered a flesh coloured and black tin. Hopefully this will give a quick basecoating option and give me a boost to get them painted. Meanwhile I have been highlighting and rebasing Spanish and Numidian cavalry so I will probably  post some updated pics of those units next. 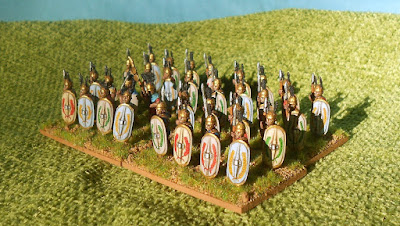 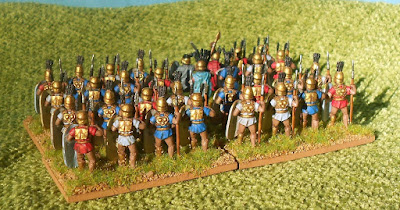