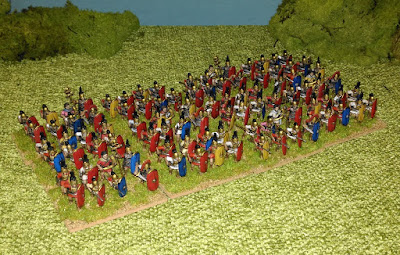 Yet more Mid Republican Roman Legionaries in 20mm by Newline Designs and the bulk of them done now with just Triarii and the odd base of Hastati and Princepes left unpainted. This post is reporting 13 completed bases of Hastati and Princepes each with 8 miniatures. Its the biggest batch of miniatures I have painted at once and I'm not sure if I could pull it off again but it was satisfying after completing so many at once. 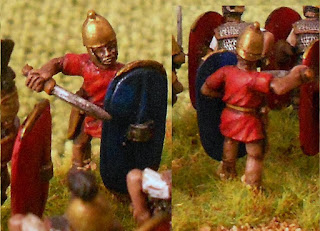 The first two pictures were attempts to capture the majority of the minis on my wife's camera phone most of the following closeups are taken with the Nikon's macro feature. The picture below shows some of the main differences from my previous postings of completed legionaries. Namely, I did some minor work twisting the centurions' heads and sword arms from their leading fellow legionnaires pose, to a more aggressive stabbing pose. I also issued the standard bearer with a plastic standard from the Hat 1/72 Roman Command set as I thought it would look better than my previous attempts at painting a vexillum free handed.

When I was dividing the troops for each base I found I was one short, I drafted a spare veles (above inset) twisted his arm a bit and gave him a sword and scutum. I decided to use him for an experiment to reduce painting times for future miniatures. The main change was to undercoat him with foundation flesh paint, for some reason I find painting flesh on ancients an ordeal, probably because there is so much on show. With the flesh under/base coat done I blocked in the colours red/brown/brass; applied a brown wash then highlighted the relevant colours. I completed the shield at the end with the rest of the legionaries.

Overall he didn't take too long to complete and I think undercoating in a foundation flesh paint will save a lot of time with my next few units. I am now working on updating, rebasing and adding to my Carthaginian African heavy foot in the hope of creating 2 units of 4 bases each. But at least for now there are more Romans ready to assemble at the Field of Mars. 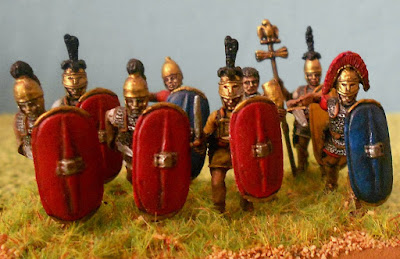 A close up of some of the fresh Hastati: 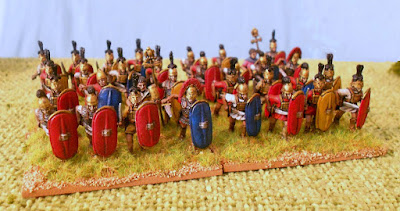 And below most of the Roman foot so far (camera phone):