Fighting in the Tarantine Fashion 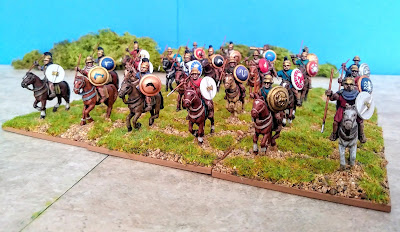 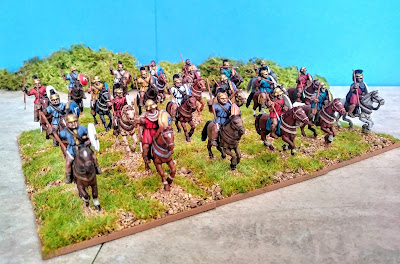 This is an updated unit of Tarantine cavalry based on a "finished" unit of Newline Designs 20mm Tarantine Cavalry code with their Greek light cavalry code. The Greek light cavalry are easily converted into Tarantines simply by adding a shield. In addition I added a spare Macedonian mounted musician and a few Maccabean light cavalry for some cloaked riders. Using a variety of shields and head swaps the unit now has a motley appearance.

There are any amount of helmet styles in the Newline catalogue for even more variety if needed. I'm sure some of the other cavalry codes would be suitable for Tarantines depending on how armoured or varied you would want them to be.

I spent a bit more time introducing various coloured tunics into the painted and unpainted figures. Also with the shields, some hand painted designs, some waterslide transfers and some a hybrid. The hybrid ones used the bronze base and black dolphin designs which were simply painted over. In addition there is also some spined Celtic type shields and some cast with a horse design enbossed (from the Early Roman Hoplite code).

With the head swapping I took a shortcut, which I paid for in damaged heads! My cheat method is to twist and shear the heads off. I have had success with this in the past when I was twisting them to add variety to head positions and accidentally took a head off! In this instance though and even with aid of a well padded hobby vice some heads got a bit squished.  I should have learnt from my Hannibal on foot conversion but nevermind I'll use my diamond saw next time. A couple of helments were slightly damaged not too bad but some of the bare heads were mangled one beyond saving and now has a spare Carthaginian elephant crew head. The other was converted into an injured rider with a rudimentary field dressing.

Overall I am pleased with the results and I will have to do more pick n mix units. I already have one planned using various pikemen offered by Newline. However I have a few more things to crack through before them. Busy working through some Persian slingers to top up a unit I finished a couple of years ago so they are likely to be the next post! Below I have quite a few pics to highlight the variety within the unit: 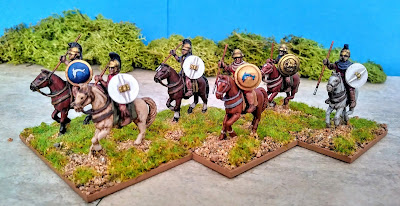 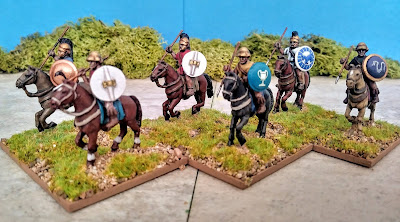 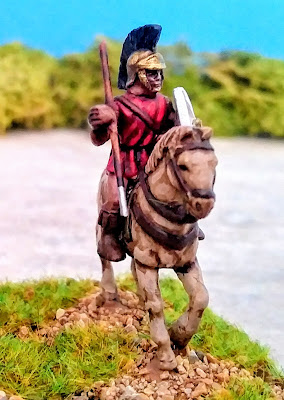 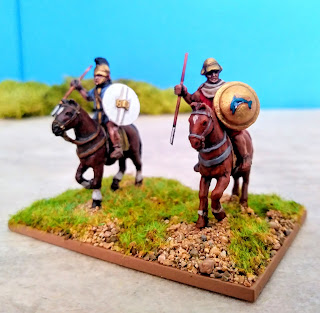 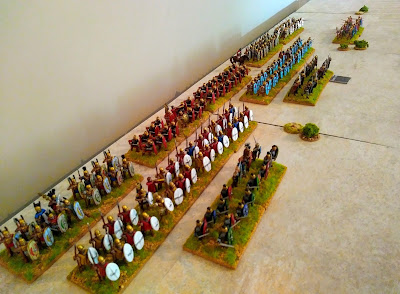 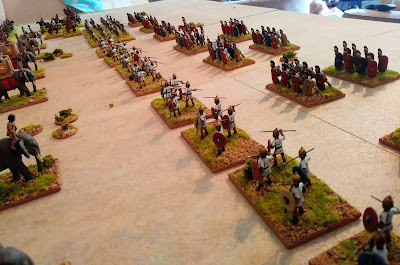 Carthage's empire was crushed overseas and now faced the same fate in Africa. Carthage's African empire was also not what is was, rival Numidian king Masinissa, has taken arms against Carthage with a sizeable host of 6000 light foot and 4500 light horse, so that now Rome enjoys cavalry superiority and on these plains could be devastating. Scipio had attracted an army of 24000 hardened volunteers of all arms for his legions, each with their own personal axe to grind. But before they can get to grips with Hannibal's men who ravaged their homes they have to cut through elephants, 9000 Gallic mercenaries and 12000 African levies. Once tackled only then can Scipio's men take on the 15000 men Hannibal left Italy with. Hannibal knew that he had to grind those legions down before the cavalry decided the day, with this in mind he let battle commence... 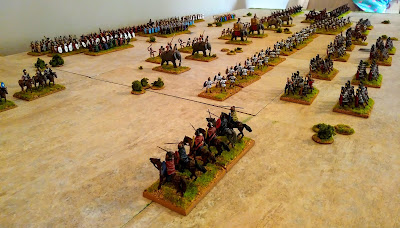 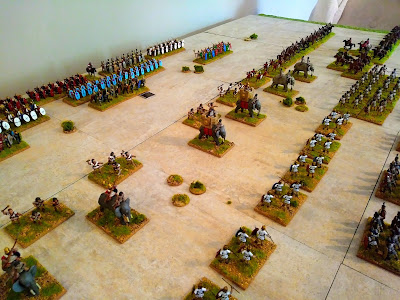 Hannibal sent his elephants forward to tackle the legions of Rome, followed closely by Balearic and Libyan skirmishers the hardened Legionaries and Velites were not too troubled by this. Hannibal's left was flanked with a now diminished complement of Numidian horse opposed by Rome's Numidian ally Masinissa with his cavalry and infantry, the Numidians began their customary indecisive skirmishing. Scipio's heavy cavalry charged head to head off the Punic horse and the effort and zeal of the Roman horse caused the Punic riders to break with little fight offered in return.

As the Velites fell back the brunt of the elephant charge was borne by the Legionaries. However Scipio's well drilled and well lead legionaries soon nullified the threat and prepared to deal with Hannibal's line of Celitic mercenaries. The victorious Roman horse breaking off their pursuit headed towards the rear of the Punic right. 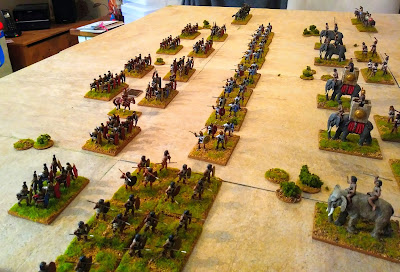 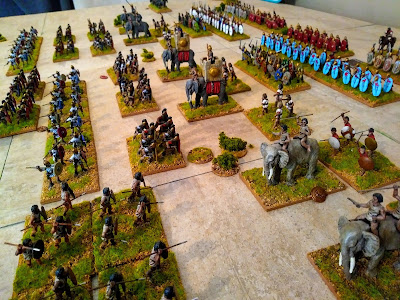 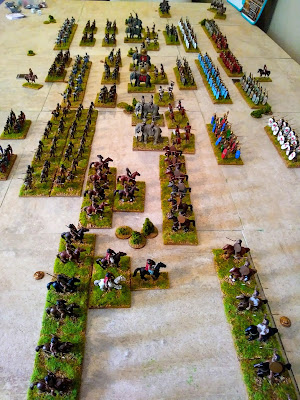 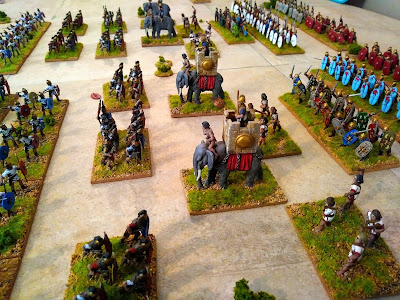 Eventually the Numdian King with his edge in leadership and numbers broke through the Punic allied Numidians and commenced pursuit. Soon after the threat of the Roman horse and the advancing legions sent the Celts in the centre and right of the field in a wild panic, the rapid collapse and threat of enemy cavalry caused the Carthaginian and Libyan levy to panic with them. The chaos and the Roman cavalry's thunderous charge was too much even for the Bruttians who marched off the field in good order even some of Hannibal's veterans were hit hard by the Romans. 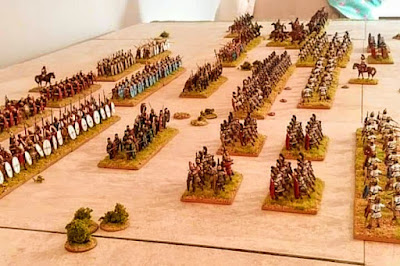 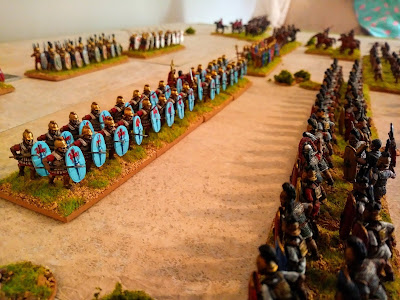 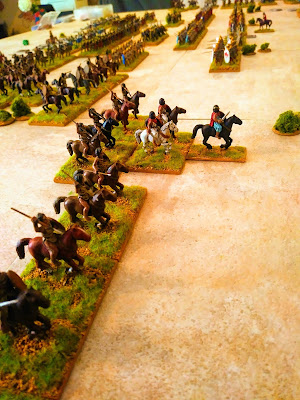 The destruction of Hannibal's right wing was a crushing blow and he saw no other option but to order his loyal veterans of the Italian campaign to begin the arduous task of retreating to Carthage doubtlessly to be harried all the way. 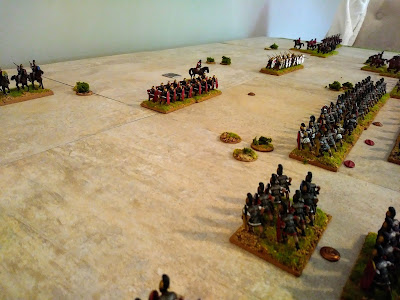 With such a swift and decisive victory over Rome's Nemesis a relieved Scipio began contemplating exactly what terms he could extracted from the great city of Carthage. With his army very much intact he was expecting very favourable terms indeed!

A "resounding victory" for Rome which gets knocked down to a "major victory" with the handicap system. A lot more one sided than the historical battle due mainly to the dice. Hannibal rolled terribly while Scipio's dice were blessed by the gods! While Scipio was inflicting double hits Hannibal depended quite a bit on Scipio's all out attacks to claim back some much needed victory points from spent units. It was almost 50/50 for inflicted to voluntary expending of Scipio's fresh units! The heroes of the day were Scipio's Veteran Heavy Cavalry after swiftly dealing with the Punic horse double round the Punic left to then inflict a double hit left Hannibal little chance to wear the legionaries out.

This is a scenario that could go either way though tipped towards Rome. The unknowable factors represented by dice rolling that cause units to shatter and potentially flee make the Lost Battles system quite tense. I also like the victory point system, if fortune favors one side in particular it could cause a shock victory/defeat. I think with that in mind the various grades of victory and defeat would transfer well to a campaign system. The boardgame came with Empire which does just that and I infrequently work on a set of campaign rules/ideas but with still getting to grips with the rules and not often getting to game they are a long way off being needed, tested or finished!

I made a few game aids as well as downloading a few from boardgamegeek. This really helped keep track of things and the cut out combat modifiers were great. They allowed me to filter out and put to one side the modifiers that were not needed for the battle, terrain for example. With a lot less modifiers to rake through combat was resolved quickly. Although I think I did make a mistake resolving a double hit which I should have applied both at once then resolve morale, I think I resolved it after one shatter them applied the second hit which helped boost Rome's victory, never mind I'll get it right one day! 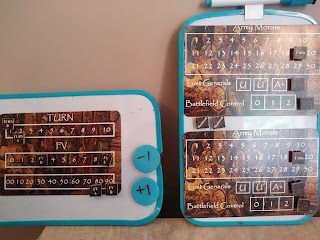 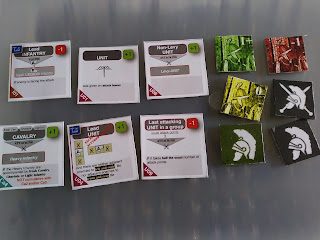 I was hoping to get a new wargames mat this year but events have knocked that back. The old tiles aren't too bad they did the trick on the day. The photos are what they are, where the table is the lighting isn't great so it's the best I could do. I hope to try to make videos at some point but I would need a bit more time to experiment with that. Something to try down the line.

Feeling more familiar with the rules I am looking forward to another battle its just the opportunity to play is limited. I have also been looking into other rules to go for a quicker game for a limited time but as I become more experienced with Lost Battles I think I would be hard pressed to find a quicker set of rules and the trade off wouldn't be as satisfying as a Lost Battles clash. Until the next game there is much much painting to do at least to scratch the hobby itch. Newline Designs 20mm Tarantine cavalry are well on their way to completion.
Posted by Tony Emery at 10:03 10 comments: