I have been trying my best to avoid being distracted by the internet and games. The computer going off for repair the other month helped so I began to work on my Gallic troops and Romans en mass. The posting is a bit of a cheat, most of the figures were completed in the past and are reappearing because of the rebasing I am slowly working through. I did however spruce them up, added some patterns and highlighted shields and Helmets.

I did paint most of the mailed nobles recently and I finished them and based them along with a lot of Romans which will follow in the next post. With these Newline Design 20mm Gauls based up the Punic War Project was back in full swing.

I have also tried with these next few posts to improve my photography. I struggle to get nice crisp pictures except on bright days and I don't have much in the way of a gaming table or terrain. This year I picked up a green throw which I thought was a nice natural colour, something that can be popped on the dining table and very easily stowed away. It's no gaming mat but it will hopefully do the job for now for a grass plain. I have attempted to add some kind of sky to the background using a t-shirt, so at least my backdrops have a bit more colour to them.

With the cameras I have been trying my wife's new camera smart phone and a newish digital camera given to me by my sister, who feels she doesn't need it because of her smart phone. The digital camera has an excellent macro mode and I feel I have gotten a few good close ups as can be seen below. The pictures at the top of this post are from the digital camera using the flash, which I think is too harsh for taking pictures of miniatures but overall they are ok. Going forward I'll work on using the macro function to better effect. 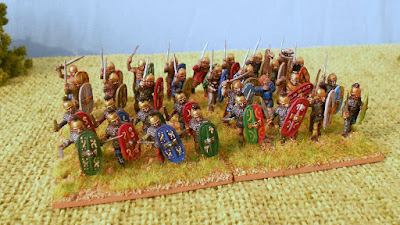 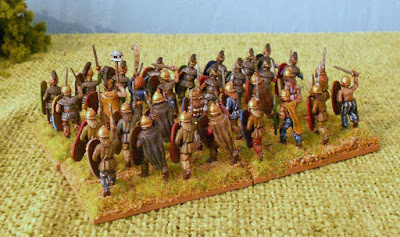