The Punic levy for the Carthaginians at Zama using a couple of poses from Newline Designs 20mm African spearmen in tunics. I gave them thureos/scuta shields instead of the Argive type shields that came with them. I could have created a more rag-tag looking levy by fully utilising the variety of helmet types with this code, mixing shield types and even a spattering of armoured spearmen standing. A future project hopefully, I have the figures but not sure about the storage space.

I undercoated these with white guesso and the usual method of base colours, wash, highlight. After a bit of experimentation I went with flat white on the shields with no shading. I tend to prefer advancing poses, but as I have found previously with the Triarii and Samnites standing, the pose ranks up nicely with no hassle. I only have a few units left for Lost Battles Zama scenario, I created a to-do list on PARADE GROUND WORKSHOP to help keep track of where I am at with my projects. With hobby time reduced recently I found it helpful.

I have started to paint a few example of some resculpted Etruscans from Newline and a few more bases of Numidian light foot to provide Rome some levy light infantry for Zama. I have posted Numidian foot before but I may again to show some progress on this slow blog! 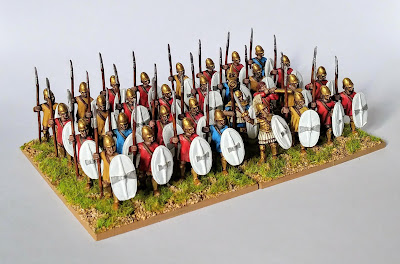 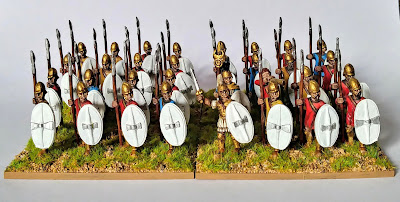 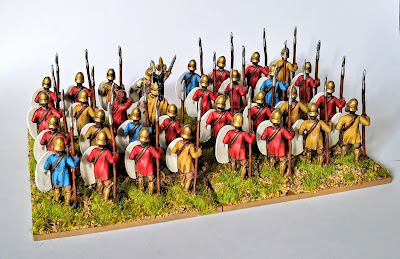 I was left alone for a few hours so I took the opportunity to set up a battle. I set up Trebia using Lost Battles and following the scenario deployment. I was rushing around to get it set up, played, photographed and put away I ended up forgetting to implement modifiers and not using the rules for wet weather incorrectly so I apologise in advance for the sloppy implementation of the rules.

So the Roman infantry were not as hard to hit as normal. I forgot to use the -1 attack modifier for lead heavy infantry attacking fresh legionaries, although I think it may not have been needed a lot as elephants and light infantry lead most of the successful attacks in the main battle lines. However it must have given the Carthaginians a little more help, praise Melqart! With the wet weather I followed the attack modifiers, but forgot to check for weather change at the start of each turn and the fact that the wet weather halves the command points was also missed. There were quite a few high command rolls too but the battle played out well despite the missed rules.

Sempronius Longus had a point to prove to Hannibal and his barbarian horde. Despite the freezing rain Sempronius was to show Hannibal the virtue of true Romans and lead his army through the mud and water in the full knowledge that they would send the barbarians back into Translpine Gaul. And all on an empty stomach!

Hannibal and his men were prepared for this provoked, rash Roman behavior, waiting patiently whilst their enemy trudged the cold muddy river exhausting themselves before any blows were struck. Furthermore Hannibal's brother Mago, lead a group of his fiercest Numidian horsemen and were ready to strike when the time came. 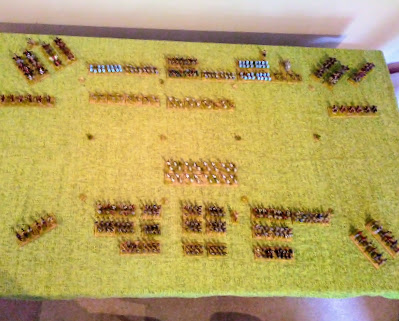 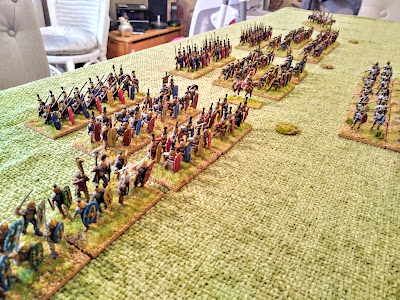 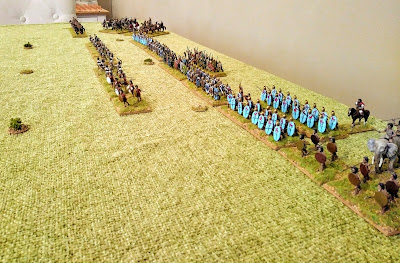 The light armed clashed in the centre, the more competent Carthaginian skirmishers were overwhelmed by the weight of the Roman light levies. This poor show of force surely had a negative impact on the Punic centre as they went on to struggle through out the battle against the cream of the Roman army. However Hannibal knew that by pushing the light armed to breaking point it would buy crucial time and that the morale of his line would hold. The Gallic and Iberian heavy foot eventually forced back the Roman light armed but had to retreat under the unrelenting legions, hoping for Mago's relief force. They regrouped and prepared to gird their loins.

Hannibal personally lead the Punic left and his elephants caused much disruption to the Roman right, the Cenomani were particularly troubled by the elephants, they were the first of the Roman line to flee.

It was the infantry clash that would settle it for Sempronius but the Punic line held its own. 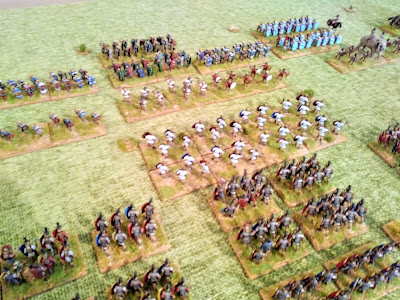 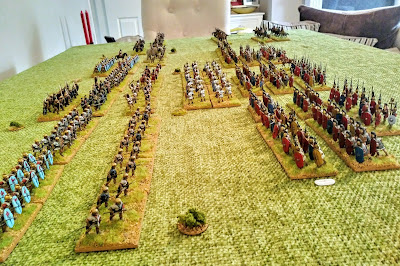 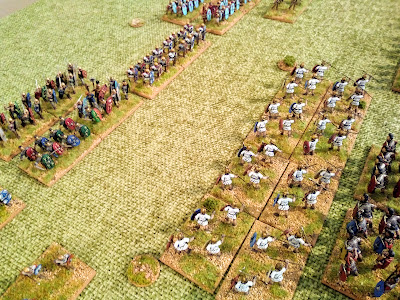 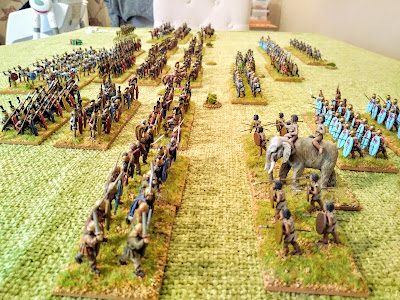 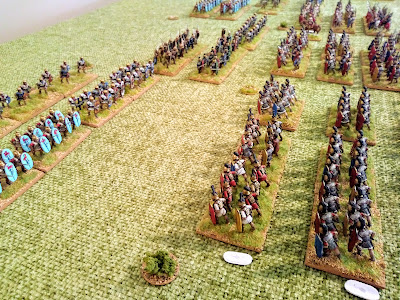 Hannibal knew what he lacked in infantry he more than made up for it in cavalry, and he knew it would be decided on the flanks. The Numdians raced forward on both flanks hoping to wear down the Roman horse which held back to cover the Roman flanks long enough to allow the legions to do their work. The Iberian horse on the right and the Gauls on the left followed the Numidian screening force and it was not long before the Roman horse was concerned. As the Roman centre forced the Punic infantry back, Hannibal showed Sempronius his master stroke as the Roman horse crumbled, Mago and his horsemen appeared behind the Roman centre. The heavy Iberian and Gallic cavalry soon made their way behind their respective Roman flanks. 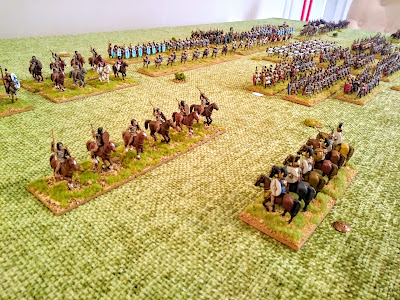 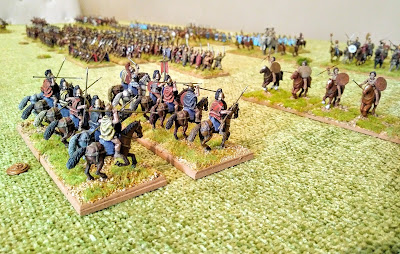 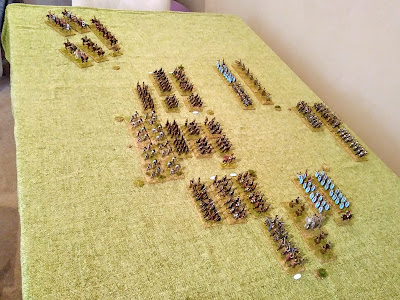 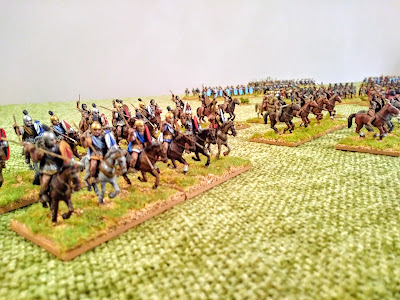 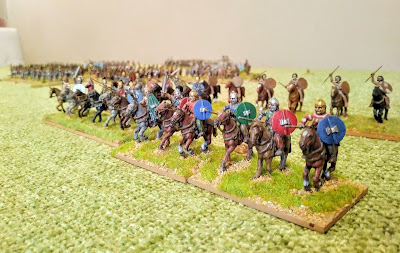 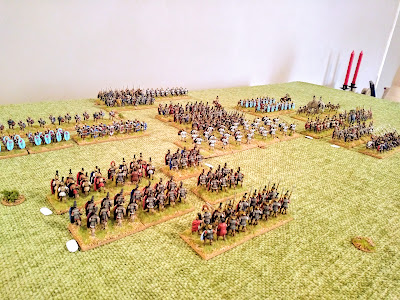 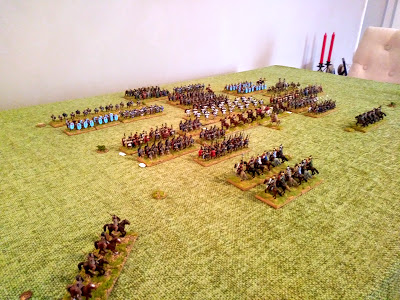 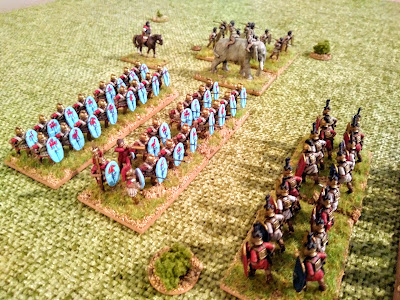 The Roman right was the first to crumble allowing Hannibal to turn his African heavy infantry onto the Roman centre's flank. The killing strike came from the Iberian horsemen descending upon the rear of the Roman left, shattering two Roman formations and routing the rest. The morale in the centre held onto one last hope. 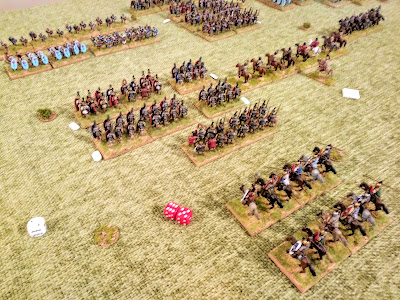 That last hope was to break though the worn Gallic and Iberian tribesmen, however, Sempronius' men were too tired and the Punic centre held out whilst Mago's picked Numidians struck the final blow. 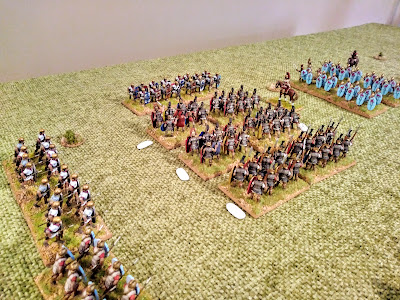 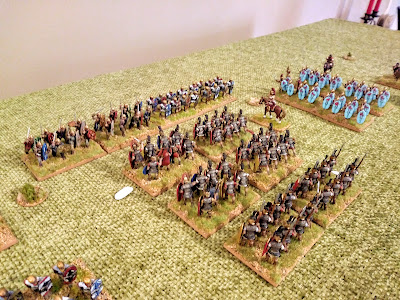 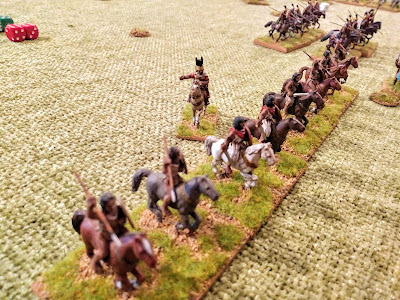 I'll attempt to work out the victory points! As mentioned above as well as the fatigue suffered by the Romans they had to suffer from a few missed 'Fresh Legionary' modifiers. I'm not sure who the missed wet weather rule helped most? I imagine again it was Hannibal as there were plenty of spare commands for attack bonus'. After a poor start with the light infantry duel in the centre the Carthaginians around the battlefield came off alright Rome seemed to roll well for commands but poorly for attacks. The dice rolls add the chaos and the tention in Lost Battles and the fear of a double hit is ever present.

Although levies are fragile receiving attacks and suffer too in the morale roll, in the few battles I have played they have been able to cause trouble to their opponents.

Hannibal used the 'flip-flop' of the turn order on turn 5, mainly to retreat the centre before the legionaries made short work of them. It also allowed Hannibal to finish off the Roman cavalry with a fresh stock of commands and only the flanks with units available to attack so they got a few attack bonus'. Hannibal's (and Mago's) command and attack bonus exceptions were pivotal to Carthaginian success throughout the battle, along with the flip-flop rule that replicated Mago's ambush. The ambush is handled abstractly as the Numidians were deployed with the rest of the army however the 'flip-flop' rule allows for 2 consecutive moves so by giving the Numidians double movement they could almost fly around the battlefield! Despite my many rules cock ups Lost Battles gave a realistic outcome for Trebia.

I am now realising that I am confused again over the ALE FV? During the battle should I have added 6 more FV to the overall Roman FV of 73? This may have again exacerbated Rome's command and control, although initially it would not have given the Romans and extra command to use they may have lost  out as units were removed from the battle? Hopefully a veteran player can help, but it sounds like another rules error against Rome! Terrible! A rematch will have to be on the cards... (EDIT: turns out I had done this right at least; FV 73 when fighting and FV 67 when scoring for the Romans.)

After all that Lost Battles again provided a tense and interesting game even though it was played solo. If I could manage to play it more frequently I am sure I would remember the rules better and get a good smoother flowing game. Some of the modifiers seem quite wordy but they provide much of the nuanced interactions of the ancient battlefield and along with the morale rules give a Lost Battles game a historical feel, like an account lifted from Livy or Polybius.