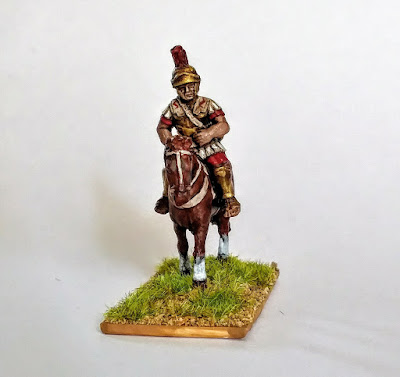 Up to now I had been using a base of Triarii with some command figures on as Roman generals in my Lost Battles reports. I have for a while wanted to paint up some individual generals on horseback to remind me that they can traverse the battlefield to the sectors most needing leadership.

The models are from Newline Designs 20mm Ancient Roman range. The first general is from the "Mounted High Command" and the second from "Mounted Roman Command" set. It was enjoyable painting a couple of miniatures instead of a whole load at once its good to break things up a bit.

I would like to expand my collection of general's further. I have in mind another mounted Punic officer to command along side Hannibal who has been my only finished general figure untill now. For Lost Battles, I believe at most there are up to two generals per side. For Zama one of the generals is a Numidian, so there is a Numidian commander in the works too. Once I get the Punic general finished I think I will have the "right" proportion of troops for Trebia. I am also wanting to get a large amount of light troops done for the Seleucids at Magnesia, (they have three levy light infantry for that battle) which I am hoping won't be to bad to mass produce being unarmoured. Lots to do so I better get cracking! 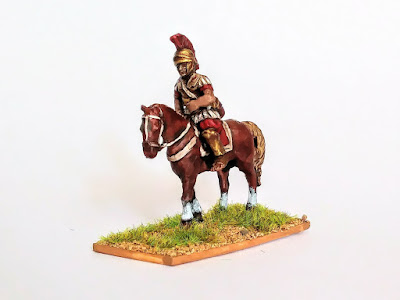 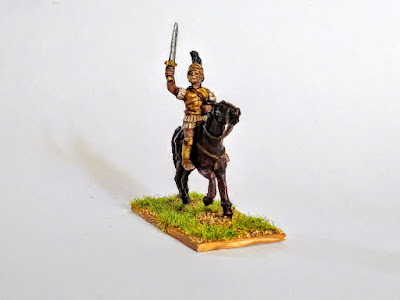 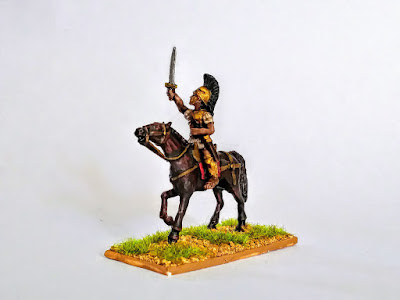 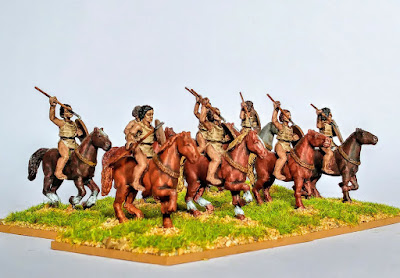 Four more bases of Newline Designs 20mm Numidian light horsemen finished. Fairly simple miniatures to paint owing to the lack of armour and horse tack. I am fairly pleased with the horses which is something I have tried to improve on, although it was a bit of a fluke. I have generally started to paint cavalry by undercoating with gesso and this time the base layers were painted on quite thinly and washed with the usual Delvan mud. I didn't feel the need to highlight afterwards, I am not sure if this was due to the white gesso undercoat or that the wash was a fairly fresh pot that has been shading more subtlety than the previous pots that had been open for a while. I did however highlight the white fur on the horses and the Numidian riders' faces. The shields I just painted separate, dark brown followed by mottling on a lighter brown.

It was fairly bright for once when I took the pictures. I again used my smartphone but was struggling to get good pics despite the bright conditions. I then found a setting "HDR" which sounded useful which helped to get better snaps along with the phone's picture editor produced the pictures shown in this post, I think I went a bit overboard with the colour settings. I have since learned that the HDR function takes a few pictures with different light settings and combines them to show more detail, ideal for taking pictures of miniatures. It will do for this blog anyway!


I had previously been using bases to represent the attack limit of the unit but I think it will look better going for "correct" ratio of men and beasts. Although cavalry units are half the size of infantry in terms of personnel in Lost Battles cavalry attacks take up the same space as 2 infantry units attacking, I think this is because the cavalry formations need more room to operate.

Because I am trying to roughly represent the games troop ratios I plan to have 16 figures for average infantry, so 8 for veteran and 32 for levy units. For average cavalry I should use 8 for average, 4 veteran and 16 levy, but being based on three to a base I'll round down to 6 figures for ease although I would have liked nine I don't think I have the right amount of miniatures just yet. So for Average Numidians two on each base I will use 3 bases. Along with my previous Numidian Cavalry this takes the total finished bases up to nine, which should be enough for Trebia, but I will need to finish about six more bases for Zama.  The game is pretty abstract so its just a case of personal preference in the end. 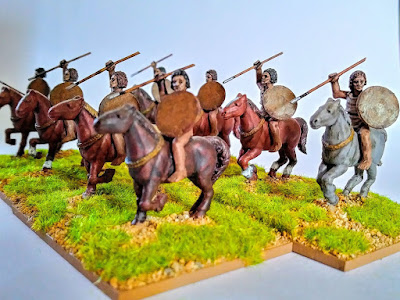 I had a chance to set up another solo game of Lost Battles and after finishing the latest batch of Iberian Scutarii I went for Ilipa as planned. Being my first play through of this battle I followed the historical set up provided in the book which sees the Carthaginian army larger than the Roman though completely out generaled and a sneaky ploy by Scipio has the Punic army fatigued. Also Scipio being a brilliant commander has the ability to flipflop the turn order which compounds the pressure on the Punic forces. Things are not looking promising for the Carthaginian enterprise in Hispania! 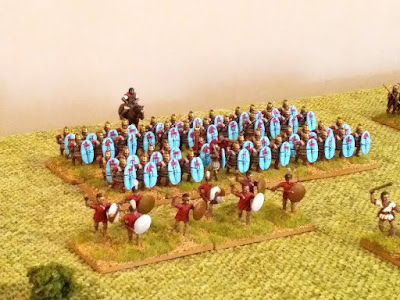 Hasdrubal falling for Scipio's ploy had formed his troops and without food and waiting for a long while in the Spanish sun were becoming weary. He had deployed forward his light troops and elephants, his Libyan phalanx in the centre to shadow the expected legions and his Iberian allies flanked the phalanx. The Numidian horse screened his left flank and his Spanish horsemen sallied from his right flank. However Scipio having made Hasdrubal accustomed to the legions deploying in the centre on the day placed them opposing Hasdrubal's Iberian foot and Scipio's own Spanish allies marched forwards to contest the centre. Scipio sent his veteran Equites to challenge the Spanish horse and his other cavalry to drive away the Numidians.

Hasdrubal himself, was succumbing to the pressures of the day, was not his usual self and it was felt through the whole of the Punic army. His lack of vigor was in stark contrast with Scipio's well drilled and well lead troops which stormed towards the Punic army which watched in awe. Hasdrubal had been wrong footed. This rapid advance took its toll on the Punic avant garde and the cavalry fight began also with ferocity. 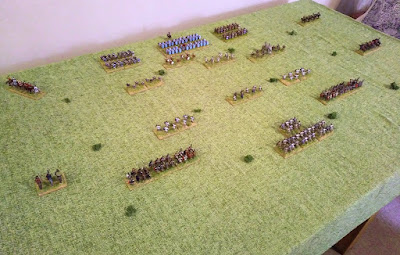 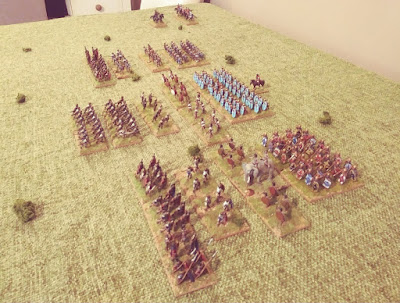 Soon the main lines closed and again fierce melee ensued with both the Romans and Carthaginians pushing themselves beyond endurance in what was almost a Heraklean labour. Both lines began to suffer but the earlier suffering of the Punic army was beginning to take a telling toll upon the men. 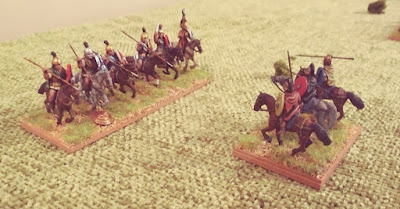 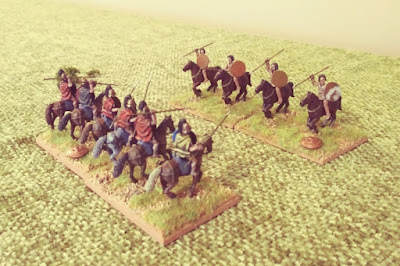 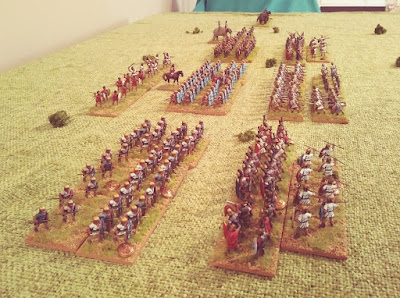 The Numidians managed to somehow break the will of the Roman cavalry but the veterans at the other end of the field although suffering themselves sent the Spanish horsemen off the field scattered. The remaining horsemen then went on to harass and threaten their opponents. Despite the initial ferocity of the battle exhaustion had brought stalemate in the centre. However the Roman legions began to break their Spanish adversaries and with the victorious cavalry now threatening their rear they fled the Punic right. The Punic left had began a similar decline as a shocking attack upon the Spanish Scutarii had led to the elephants becoming embroiled and they shattered fleeing the field. The legionaries inspired and extolled by Scipio continued to grind the Spanish tribesmen eventually pressing forward to threaten the African Phalanx. Silanus mirrored Scipio and threatened the other flank of the phalanx shortly followed by the Equites. 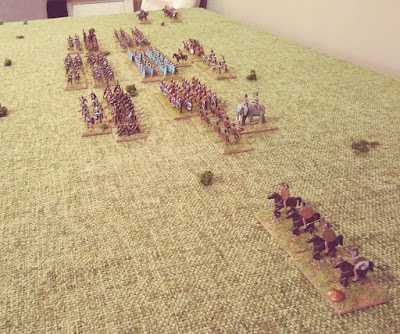 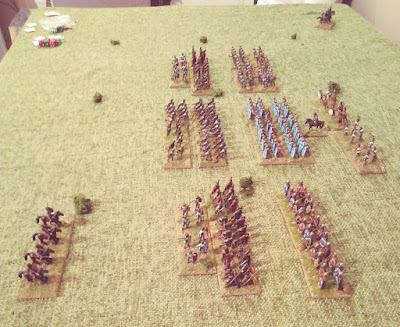 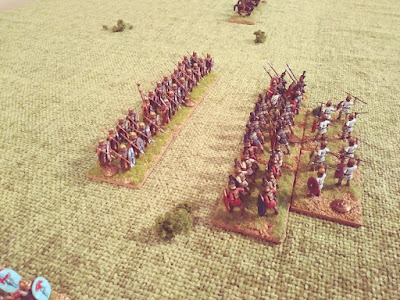 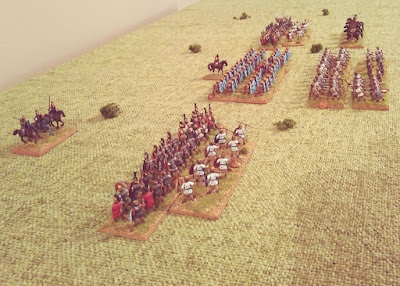 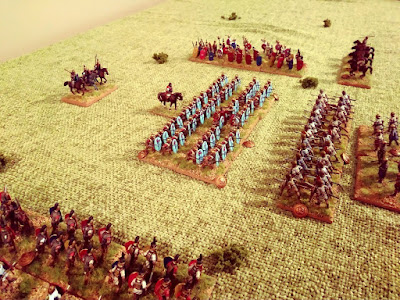 A valiant last effort from the victorious units caused a unit of legionaries to panic but Scipio by his personal example inspired the men to stay in line and a last ditch push from Hasdrubal's faithful Africans broke a Spanish warband but it was not enough he was surrounded his men exhausted and the Romans closed from all sides to finish Carthaginian aspirations. Scipio now ruled Hispania in the name of Rome!

A black day indeed for Carthage! With Rome having both a brilliant and an average one to Carthage's single uninspired general made a massive difference. The command and attack exemptions generated freed a lot of commands for the sectors that lacked a generals direct influence. The flip flop to reverse the turn order from turn 2 allowing Scipio to deploy second with quite a few commands then attack first really hit the Carthaginians hard who then struggled to muster effective attacks.

The scenario is a good scenario to explore what ifs and tweaks, such as if Hasdrubal had not been so rash and had been more on the ball giving Carthage more commands and not suffering fatigue for example. Maybe the next battle will be an alternate Ilipa but I also have Trebia in mind once I get some more Numidian horse finished.

I would also like to create a solo campaign system to give context to some battles in which the outcome would affect control of regions and such depending on the level of victory etc. something I am mulling over. Still the game was under 3 hours which would have went quicker without taking pics and if I played the rules more frequently (amongst other distractions). I wouldn't mind finding a ruleset that could be set up a played quicker for when I don't have time for a Lost Battle, I have enough rules to test out so I'm sure one will do  or I could make my own up, yet another project to think about. So just to finish off the scores firstly showing the turn order of the losses then a working out of the victory points:

A narrow game victory for Carthage, but without the handicaps a clear Roman victory. Many thanks to Aaron Bell for helping me with the VP score, I had misread the victory point calculation rules in my haste to post and missed some other things also.

Cloaked Iberians, for Carthage or Rome? 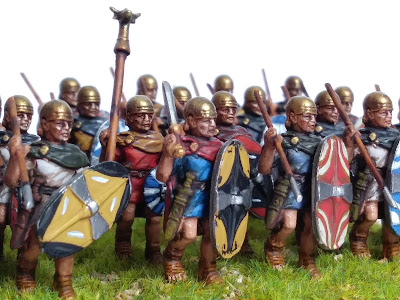 After being so sanguine about getting a few units of Austrian and Hungarian Napoleonic infantry I opted to return to ancients. I had a good session spray painting both the Napoleonics (white) and these Iberians (flesh). As ever they are Newline Designs 20mm from their ancient Spanish line (ANS01 Scutarii). All of the miniatures featured are the same pose, I stockpiled quite a lot of the ancient Spanish infantry and have used one pose for each unit... I am not quite sure why I did this,  there would be a great amount of variety if I had just kept them mixed, but I did.

I gave a couple of them some accessories from Hat's 1/72 Carthaginian Command set to give the unit a standard and a leader with a sword. I think I had put off painting these because of the shield designs are fiddly and time consuming and I have already painted 8 bases of Iberians. However for the Punic wars you need quite a few of them especially for battles in Iberia such as Ilipa which had Iberian tribesmen fight for both Carthage and Rome. It is for that battle I painted up this batch for and I hope that sooner rather I will get to re-fight the scenario with Lost Battles. With ancients back at the forefront I think I will crack on with a few Numidian horsemen. 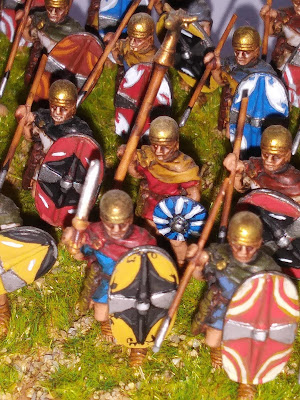 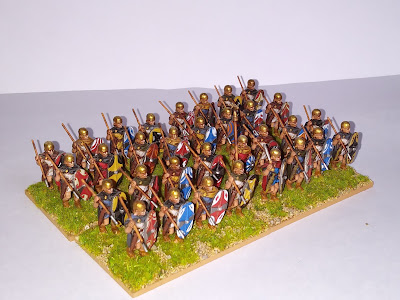 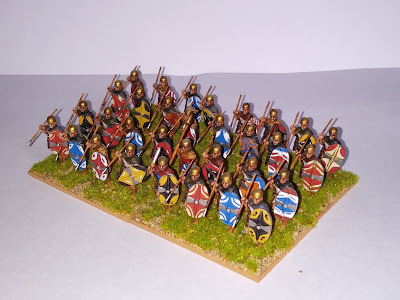 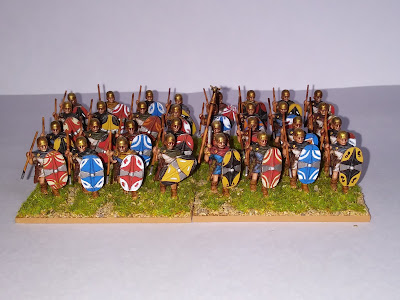 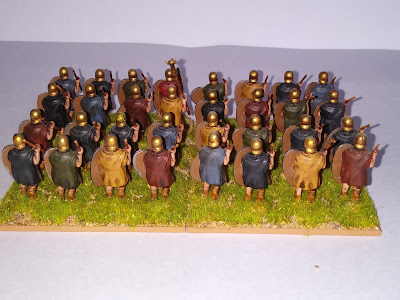 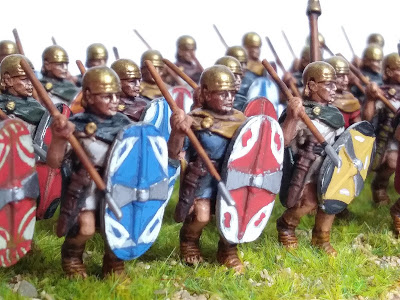