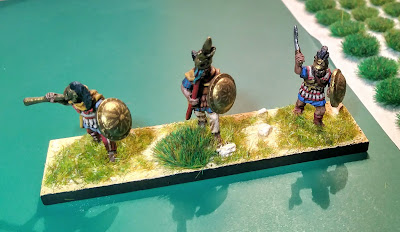 As I mentioned in my previous post I have decided to rebase my ancients armies. A rebase is quite a big task and I have thought about it a lot which after weighing every thing up I am going for it.
Firstly it was the format and size of the bases. I really like the look of larger Impetus style bases and looking at my table size 80mm seems to be the best frontage. With that size I feel I can get a more substantial look. Another reason is the depth, I have found my 2mm thick bases hard to handle particularly when picking them out of storage. Finally the corner cutting basing I have been doing has caused some bases to warp!
Secondly the aesthetics. My usual tactic of desert sand and stone mix and static grass has served me well. Originally using Games Workshop's Sand and Grass tubs to achieve a quick and effective basing. However as they do these items were discontinued and I found that Javis had a suitable alternative and a mix of static grasses managed to get a good match for GW grass. This consistency served me well however running low on the Javis sand ans stone mix I found the new batches different colour and consistency. This frustration coupled with previous issues clinched the rebase project.
With my new Geek Villain cloth on here I thought it would be great if the new bases matched the colours of the cloth's design! I had seen a video on You Tube of Simon Miller's For King & Parliament game with an impressive almost invisible basing scheme. I won't be able to make them invisible but the matching basing colour to the board became an objective.
I was initially planning to do a quick sand and grass basing again but after being inspired by other blogs and the work of my commission painter friend I concluded painting the sand a MUST. It is the most reasonable way to get consistency and matching the colour of the sandy rocky areas of the cloth's design.
So I gathered paint and basing materials and did a few tests. For the paint quite a few Wilko tester paints were used to achieve a shade similar to Vallejo's 'Dark Sand' which is a close match to the sandy rock areas of the cloth. There is plenty of scope to achieve various earthy tones, after trying out various shades I remembered I had an ochre already in. The mixing tester sheets: 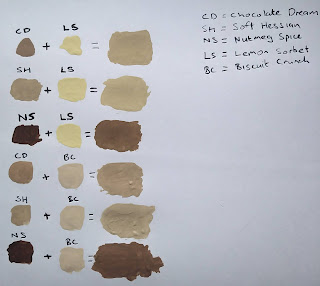 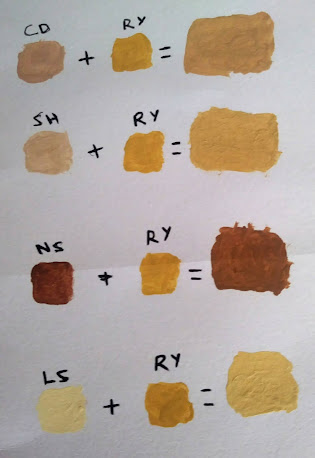 In the end Retro Yellow and Soft Hessian mixed at 1:2 gave a good match for the base colour. I may also use Chocolate dream for a slightly darker version but either will work. Their Lemon Sorbet shade works well as is for the dry brush highlight to bring up the very fine and light dusting of sand applied.
Any stones I stick on I can paint up grey and then its just a case of the static grass. The spring was too bright and the Summer too dark, mixed roughly equally gave an almost spot on blend. Then it was just a matter of testing a few figures on the new bases with the new basing recipe: 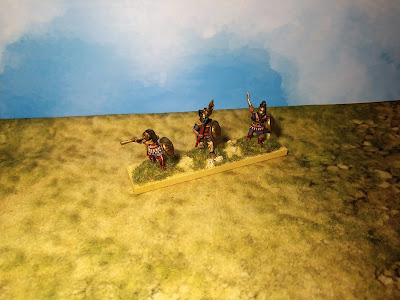 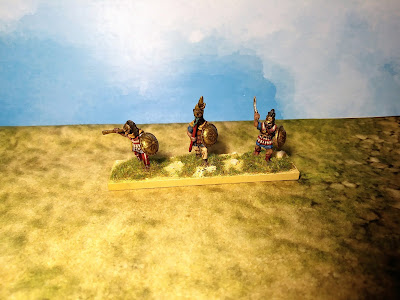 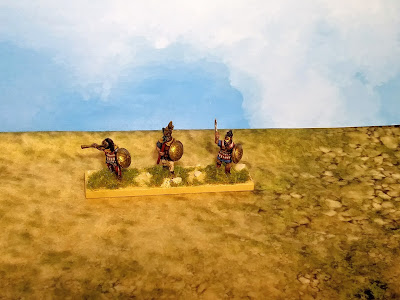 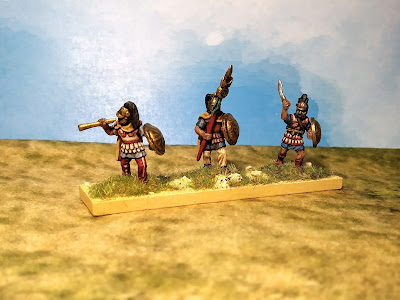 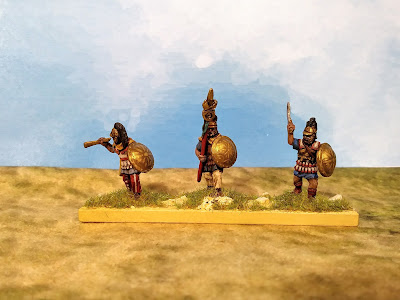 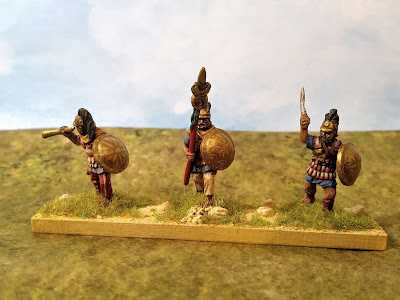 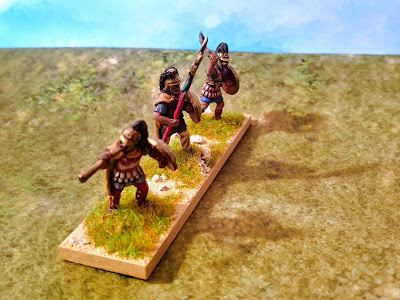 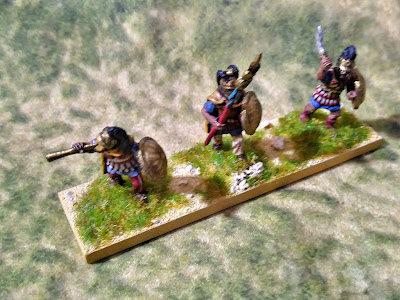 Quite happy with these results but wasn't too keen on the thicker lighter edging so a nice slimming black was applied which finished it off nicely: 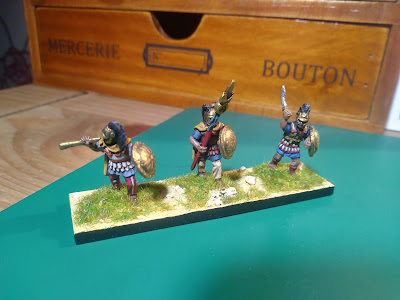 Also a bit of added self adhesive grass tufts for vegetation variation: 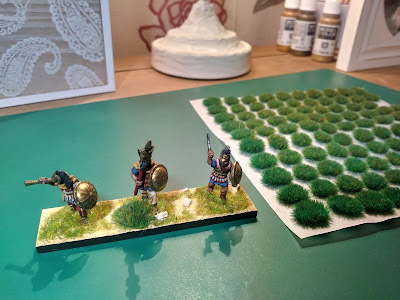 My commission painter friend recommended cutting down the tufts for more usage and if smaller tufts are needed so will try that down the line. I will have to attempt a step by step post once I have got a standardised plan going forward until then I will muddle through the various formats until I have it nailed down but overall I am happy with this style. It was straight forward doing it for this Seleucid pikemen command stand but the bases of pikemen themselves packed onto the base will be another story! Before I base them I will be "updating" their painting style and will also form a test piece for future pike units. I will write a post on the format of units in relation to their base size and density with regards to rules.
Posted by Tony Emery at 10:52 2 comments: 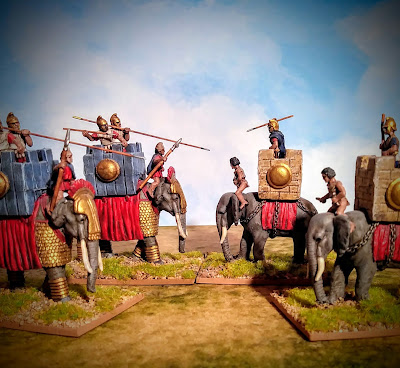 Its been a while, I hit a wall with the hobby, so after a bit of a break I'm starting with this general update which will go through various aspects of the hobby and the direction the blog will go. Hopefully this will get me back into the blogging also which has become a bit of a chore with slow laptops and fiddly phones! Neglect of the blog has also lead me to neglect the various forums I visit and other blogs I love to read but that is also real life getting in the way.
Blogs
I have decided to merge posts from PARADE GROUND WORKSHOP with this main blog. I'll keep it up for now but all future posts will be posted on here since I rarely post on there (or here really)! I want to also change the appearance of this one so I'll probably be tinkering on with it at various stages it needs a freshen up. I would like to also expand into doing videos but lots of work and not a lot of opportunity to experiment with that currently and I hate being and speaking on camera so quite a few barriers there to overcome but I am inspired by fellow hobbyists' Vlogs and You Tube channels I think they are great for the hobby!
Desk Referb
My painting area was an absolute TIP! Too many projects on the go, I did a large batch of prep last year for my ancients project and by this point I needed a bit of a change (Ashigarus to post in time) but ended up needing to prep them the desk was grid locked the drawers bursting needed a good sort but I kept putting it off. So the desk top was cleared almost completely and I bought a few desktop organiser drawers and sorted the main drawers also. Also got a neat little LED lamp with 3 colour settings and 2 brightness settings. Nearly all miniatures except the current batch have been moved away, so things are running smoother there now and it is an enjoyable place to paint and model now. 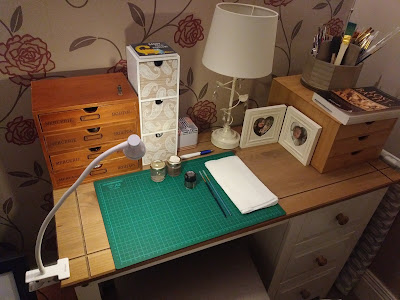 Gaming Mat Saga
At the start of the year I decided I would take the plunge and invest in a gaming mat/cloth. I was sick of the sight of my old green throw and I wanted to improve the aesthetics of my games. Decided early on to go for Gale Force 9 Neoprene doublesided gaming mat. No Luck however everywhere was out of stock and awaiting supply. I contacted the suppliers they apparently are planning a new batch but not sure when owing to the current Covid situation! Nevermind! Found an Italian gaming store selling a few! YES! After waiting 2 months and a worrying lack of updates from courier and company I ended up with a refund.
It was meant to be, I went back to the drawing board and came across a few You Tube videos reviewing Geek Villian's heavy fleece gaming cloths. It seemed a far more attractive and practical cloth compared to the bulky rubber mat, ideal here where space is becoming an issue. I have some hastily taken photos below and I am looking forward to fighting battles over it! Overall I am very pleased with the outcome. 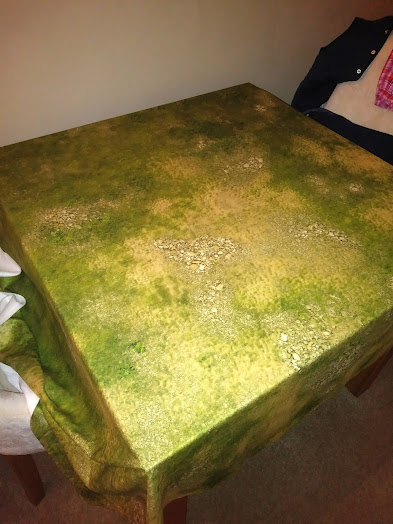 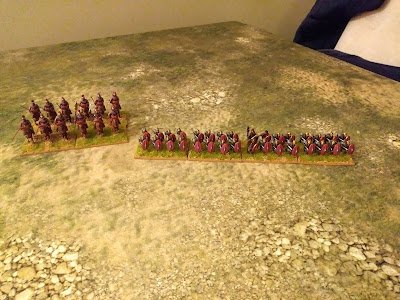 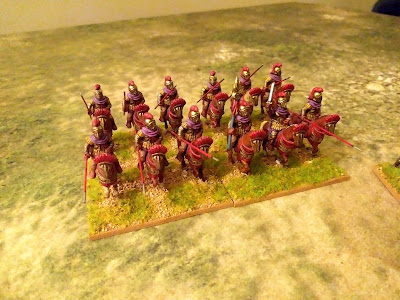 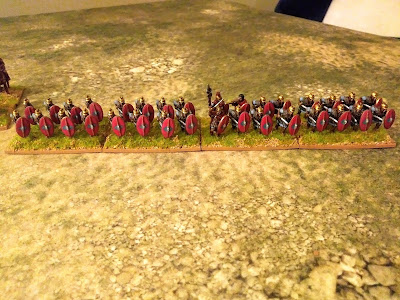 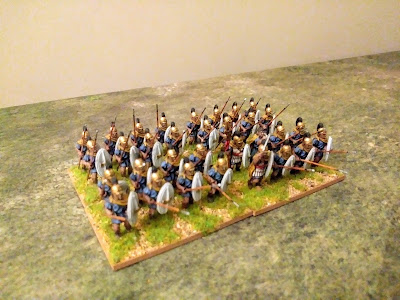 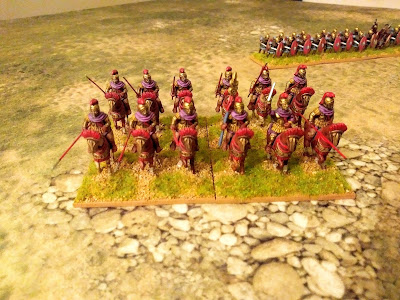 Pictures
A good friend sent me a a few sheets of printed cloudy sky pictures to provide a very pleasing background. Alongside the new cloth and the daylight bulb of the new lamp I was able to get some well lit photos at night. Hopefully that will improve the chances of getting nice clear photos and not depend on poor lighting conditions, it tends to be very bright or very dark typically. So this will be the format of the "finished" blog pictures although there might be more rough pictures since the blog is now merged with the work in progress blog as mentioned above. 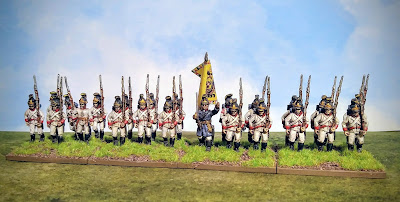 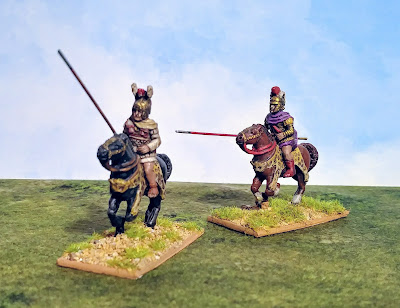 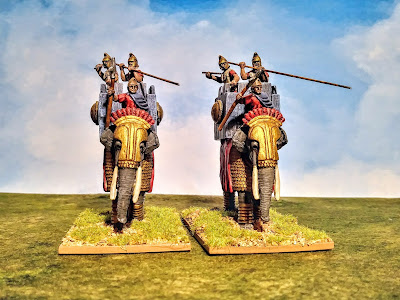 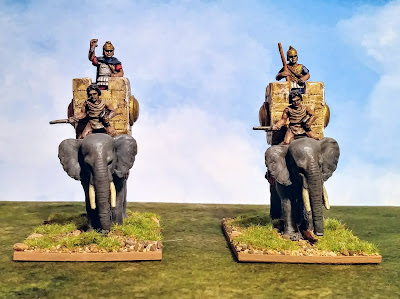 Onwards
After clearing the decks and sprucing up various aspects of the hobby I feel the hobby mojo is returning. I need to remind myself that it is the painting aspect of the hobby that is my primary focus. I need to stop rushing out units for scenarios I don't have time to play currently, and the pressure to do that makes the painting a chore. So I intend to take a bit more time and enjoy the painting and hopefully improve on it. Another thing I would like to improve on or at least spend more time on is basing. I have decided to rebase my ancients and I will post next on that subject.
Posted by Tony Emery at 00:12 2 comments: