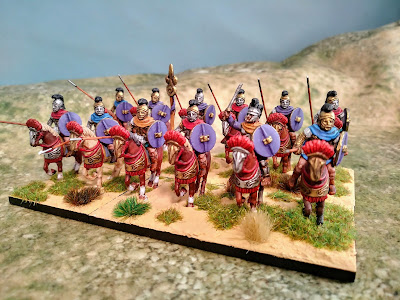 With these Newline Designs 20mm Seleucid companions now  painted up, the part-painted ancients are now done. I opted to give them smaller spears and round shields just for a bit of variety after depicting the first unit as lancers.
There was a bit of experimentation with Citadel Contrasts to see if they could fit into my paint regimes. The following were painted with contrasts; plume, gloves, boots, the feathers and frills on the horses plus the pturges on the riders. As with the previous "Attalid" unit I was impressed with the Apothecary White applied to bright white basecoat, it is a great addition to the paint armoury and the reason I invested in a few more to see if they could speed things up. Other than the success of the white the only other section I though was worthwhile to use contrasts with was the feathers and frills on the horse armour. So ideal for detail heavy parts, I'm still not keen on them in general so far. I intend on giving them a proper go on horses, I couldn't do it with these as they were already base coated and I would like to try them on a nice smoothly primed miniature.
Other than that I painted them as normal, I added variety to the unit in the colours of the metallics and clothing using the shields, feathers and plumes to bring them together. With them complete the Seleucid cavalry for the Lost Battles Magnesia project is done, save for the rebasing of some Celtic/Galatian cavalry (in hand). If it wasn't for my rebasing quest the Magnesia project would just need some Scythed chariots! However I can't help myself and always faff on chopping and changing. I have had a big push on the cavalry rebase. with less figures per unit and sparser bases the rebase has been going quite quick and the next few posts will document the progress of that. The heavy lifting will come with the heavy infantry, there will probably be quite a bit of work to get them sorted, more awkward to apply material and I may have to sort extra figures to square units up, in the mean time I'll focus on the simple stuff! 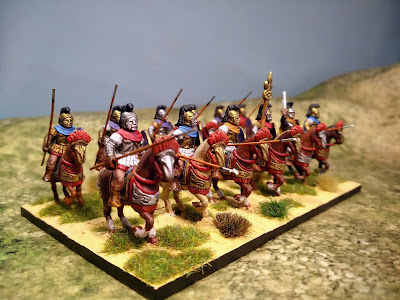 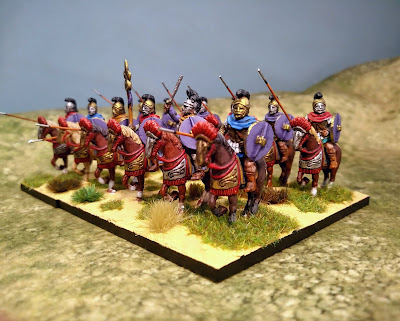 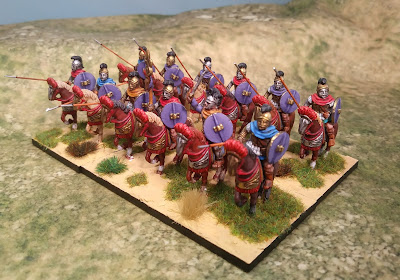 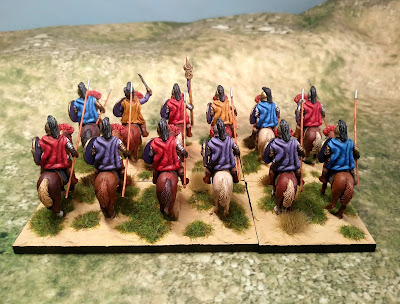 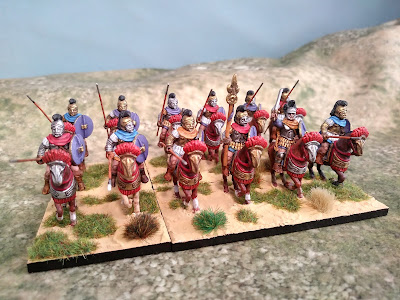 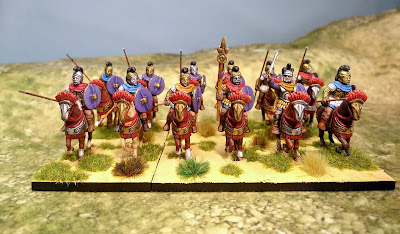 The intention was to follow closely the last post with this. However with the new house, work and childcare working in combined arms the blog remained low on the list. Any hobby time has been focused on the painting and modelling side of things. So the Seleucid companions are done awaiting photographs and there has been some rebasing progress with cavalry. Below is a brief summery of the cavalry rebase format.

I always liked the appearance of the 2x2 formation of my old 60x40mm bases so wanted to keep that 6x2 rider formation if nothing else for display purposes only! However with the quirks of Lost Battles cavalry have an attack "width" of 2 units, which for the purposes of my idiosyncratic collecting would be 160mm. However I settled for 120mm which keeps the figure ratios "correct" and still being wider than infantry bases serves as a visual reminder. To further complicate matters I hope to also use them for To the Strongest! with all units being the same width, furthermore veteran heavy cavalry, ideally 3 riders, can be represented by either the 40mm or 80mm bases. Now thoroughly confused it's best to have some pictures with a brief explanation:

It probably would have made sense to do them all on 40mm square bases but that would have been too simple! I prefer the larger bases but I like the 2 nifty bases that combined make a third 80mm base. If this post makes little sense to you that is probably a good thing, if it does you have my sympathy!
Posted by Tony Emery at 23:03 2 comments: