I just had 8 of these Persian Slingers in my stockpile from Newline Designs 20mm Ancient Persia range, which I intend to use as Cyrtians for Antiochus' army at Magnesia 190BC. I am not sure what they looked like but I believe they were from roughly the same region as Persians and Medes... so I am using Persian slingers in Median dress. I could do with a few more to make a fuller unit, but in the Lost Battles scenario the Cyrtians are combined with Elymaean to make a levy light infantry unit. I am working on 24 of those at the time of writing so they can work to make the unit to 32 men for levy infantry, but still I like these figures so any excuse to get a few more!

I have attempted some patterns and keep them bright, colourful and varied in appearance. These did not take too long to paint.  They were finished before the bundle of joy/mayhem arrived but based  afterwards so I have been able to get a couple of tasks done despite having our hands full.

I am hoping to get the Elymaeans, which are now underway, finished ASAP and paint up some samples of new Austrian Grenzers from Newline. Also some Etruscan unarmoured infantry which I am planning on using some as Roman Leves and they have new sculpts as well as being very versatile miniatures. These are my current plans which I aim to chip away with bit by bit.

Slingers of the Mediterranean part 2

An expansion to my previous bases of Greek and Balearic Slingers from Newline Designs 20mm Ancients range. This expansion came about because I realised that I "needed" to have more light infantry for Lost Battles re-fights. I hope they will mix well as these miniatures were painted with the Army painter spray flesh undercoat and Delvan mud wash method I have been using for a while now. It was interesting at least to compare some recently finished miniatures with some older ones.

I feel like I have been progressing well with my painting projects but now there will be a lot less time for painting and gaming because of a new arrival. We now have a daughter to take care of which is great and hopefully one day she will take a small interest in the hobby! I'll not hold my breath, and I will try to slowly, when I can, to continue to get a bit of painting and with any luck gaming done. 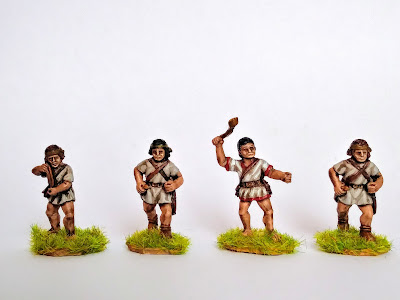 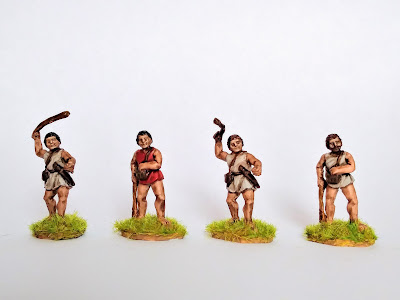 Cretan archers from Newline Designs 20mm Ancients range, ready for Magnesia even if the Lost Battles re-fight slowly descends down the 'to do list'. I am not sure whether or not to give them a small shield, but it is something that can easily be added in the future should I feel the need.

Once I got started it didn't take too long to paint. Spraying them with an undercoat of Army Painter Barbarian Flesh gave them a massive head start. Then following my usual technique of blocking in colours, then applying wash then sometimes finished with a highlight in the original colour. Although, the odd item is highlighted with a lighter brighter colour, face and dark items for example.

I have also pitched to Sean at Newline the idea of producing some 20mm Cretan archers based on these images; image1, image2 and image3. These show Cretan archers equipped with helmets and shields and look like they are ready to go toe to toe. I think they would make a cool unit and I would get some for sure! If anyone else would be interested let him know and it may just happen *fingers crossed*. 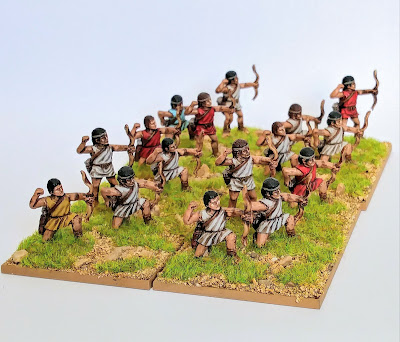 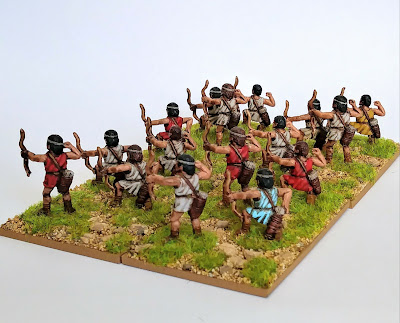