Downloadable Counters and board for Lost Battles

For a PDF of some custom click: Lost Battles Counters - So far Hannibal and Scipio battles are covered and extra units included which should allow other battles. A fresh side and a spent side, I have printed some onto some card then have glued them to a bit of "grey board" and are a bit rough and ready but do the job. The board was just printed onto card cut out and sellotaped together to keep them still. There should be a way to make the terrain tiles for Cannae and other battles.

Using unit art graphics from Civilization 2 modders "Fairline" and "Tanelorn" I believe, credit for the beautiful icons go to them. They were cut and pasted onto a printable game mat sample from Wargames Print which made the background and board tiles. Below are a few example of the counters, the files when printed have VHI at 15mm, AHI at 30mm and ALI at 60mm.

I enjoyed making them they provided a nice distraction and I will post a few poor pictures of Zama using these pieces soon.

Aspects of the Hobby

A few weeks ago (months almost!) I was wrapping up my rebased units in home move preparation. Of course having them all out and the fleece battlefield to hand I couldn't resist to get a few snaps of the African and Italian heavy infantry. I'm eagar to get more gaming done so I'll really have to get cracking with the rebase when I get settled in the new place, fingers crossed that will be soon! With a dedicated area that I potentially can leave slightly messier I can do a mass rebase of the Roman legions.
The move or lack thereof has drained me quite a bit and hobby mojo has been very low. I had been working on a homemade Lost Battles "board game" set. I'll eventually post them up and did a refight of Zama with the hastily and crudely assembled pieces again there is a write up to come eventually although it may be brief as the game notes are to the point and my memory is terrible.
Recently my mojo was returning slightly, I was missing painting. I grabbed the last thing that was started and did some work on them. We were on holiday the other week and came across a art supply shop that's usually closed when I've been that way and grabbed a few Citadel Contrasts to try (another post to work on). So have been enjoying a few nights painting but its back to reality the stress of moving has taken over again and might have to start the packing again.
Another bit of hobby activity lately has taken the form of writing down some Ancient wargames rules I think this could be the closest I've gotten to finishing one, not that the bar was high in the first place. However as I was watching wargaming videos, reading various rules and general research came across a few bits on Strength and Honour a ruleset under development by Mark Backhouse. Strength and Honour seems to already have a Facebook group and what I've gleamed (not sure if I am 100 so far from that and this Youtube video is; very grand scale, one base looks to be a full legion, grid based, variable turn length and seems to have 6-12 units per side. Clearly it's visually suited to very small scales 2mm being used by the author! So far I'm very intrigued and will keep an eye on the development of it, although I wouldn't be getting 2mm troops, although it would lose the Kubrick's Spartacus visual appeal by using larger scales, it should still work as a set of rules I'd imagine. 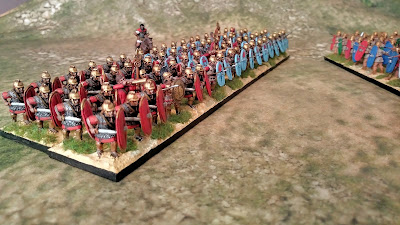 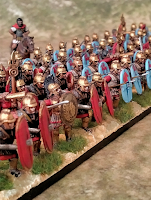 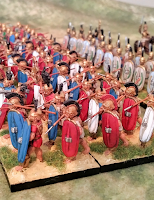 It has been difficult to get motivated with the hobby over the last couple of months and I have been struggling also to update this page! Bit by bit I am doing some painting and other tasks; made some board game counters for Lost Battles for if I can't get the miniatures out and made a start on some wargames rule writing.

As often I am asked about comparisons and as you can see one of the latest ones was the Newline Elephants, I can only compare these Indian Elephants between Hat and Newline not having the larger Zvezda ones. The Hat ones are slightly larger but I don't think they would be too out of place together on the tabletop. There's not much else to say as the pictures speak for themselves but I did struggle gluing and undercoating the Hat rubbery plastic. 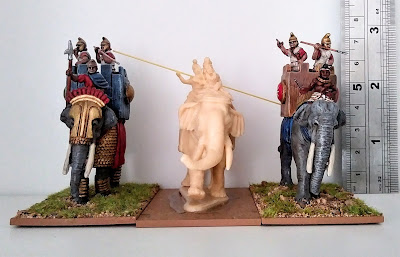 I've been slowly painting some Newline Maccabean cavalry as Eumenes II's cavalry at Magnesia, not that there is a particular historical look to them just what I will be using them as. Life continues to interrupt the hobby so I will post the various updates on here when I get a chance and hopefully at some point the cavalry will make it on here too!