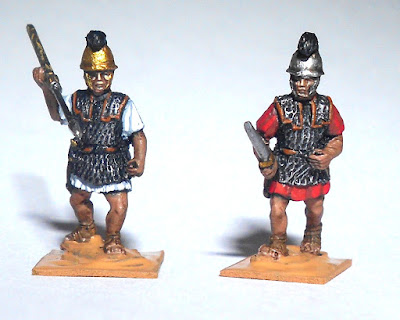 This post was supposed to be my completed Silvershields but they are still on the work bench. Struggling to motivate myself I painted a couple of these more recent Newline Designs 20mm offerings. These Marian Roman Legionaries are very nicely sculpted with very crisp details. Most notable is the tunic which has more depth and folds sculpted in than earlier Newline sculpts. A nice addition to the 20mm Ancient range with hopefully more to come.

I was hoping if I completed a few figures it would get me over the rut and back painting the larger batch of pikemen. It didn't take too long to paint four of them and they were fairly straight forward so finishing them was a tonic and a nice break from paining Hellenistic pikes after doing so many. Consequently I am back on working on the pikemen which are progressing nicely. Another thing that helps is visiting blogs and forums seeing what other painters have been working on. It's very inspiring and makes you want to get cracking!
Posted by Tony Emery at 10:15