A look at the new Newline Late Romans

Fairly recently Sean at Newline Designs released some new codes for the Late Roman range. There seems to be quite a few new codes so hopefully there will be some more to come to cover the Late Roman era further (Horse archers for example or more enemies). I acquired a few of the new codes to add to the codes I previously had and have set about getting some painted examples of them all.
It's been a struggle to keep on top of the online aspects of the hobby and I apologise for not being engaged as much as I would like to be on forums, groups and the amazing blogs of my fellow hobbyists. Recent times have been challenging and when the opportunity arises I take to the workbench which is overflowing with an overwhelming amount of tasks. One of which being the rest of the Newline Late Romans I have undercoated, and another task is a backlog of photographing. I am still getting used to the new camera on my phone so these and the following posts will be a bit trial and error with regards to the focus, lighting and colour of the pictures (of which I am very dependent on automatic features). I really want to get cracking with my Classical Mediterranean project and the rebasing but I also have to make a start on my friends Heroquest miniatures. The plan is to get the Late Roman examples done then work between the Classical and Heroquest miniatures.
I still don't have much direction with regards to a Late Roman project, but I am veering towards a more fantastical "Dark Age" Britain or Europe, painting and forming armies as I feel, without much historical precedent. With that in mind these examples are just random schemes and designs if came across on search engines. Each code from what I can gather from the examples below feature two rider poses and three horse poses: 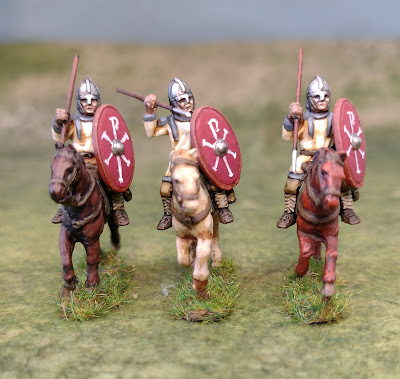 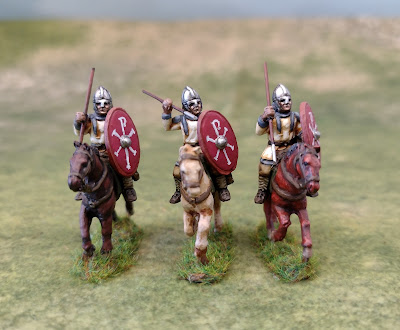 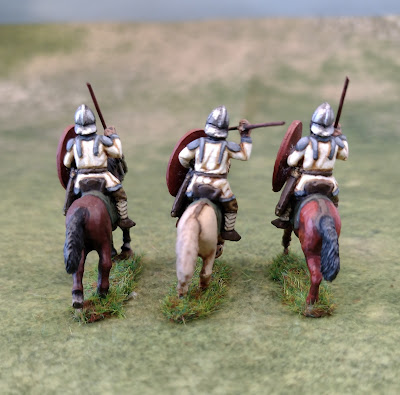 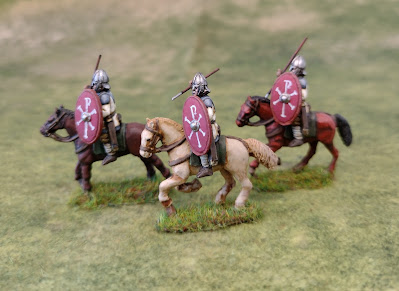 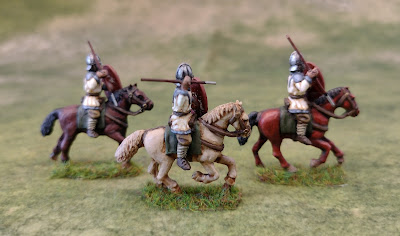 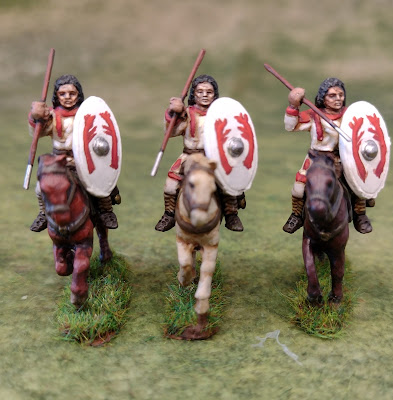 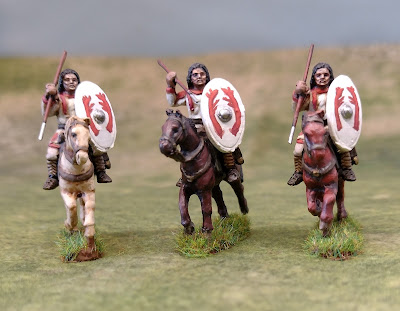 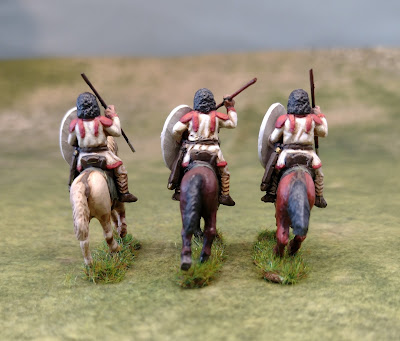 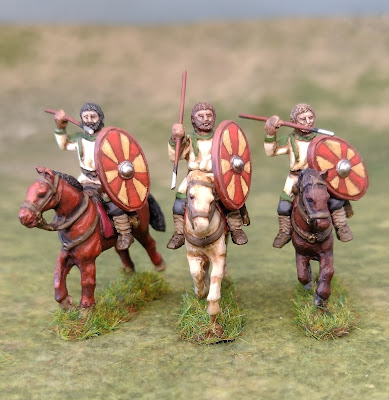 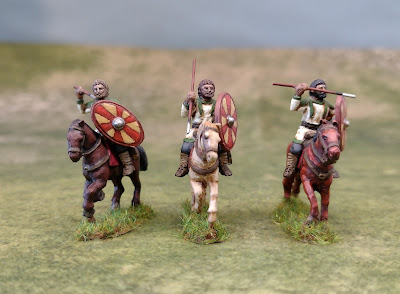 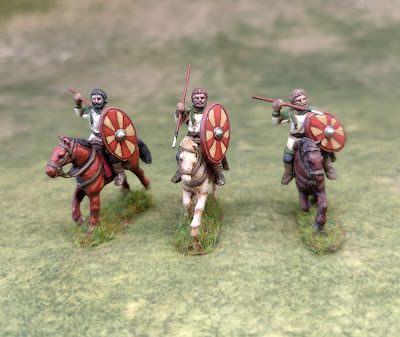 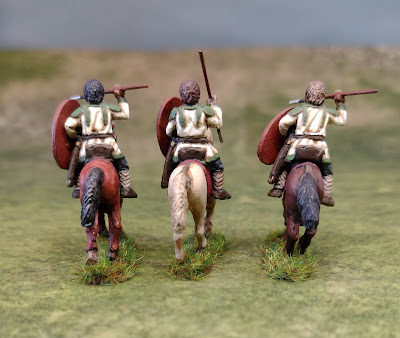 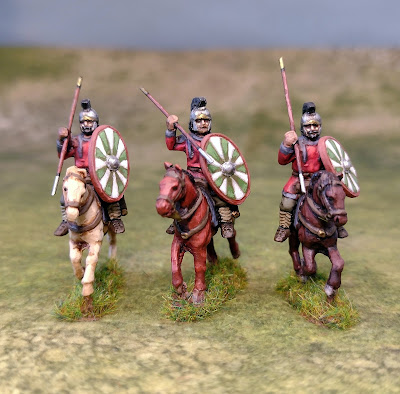 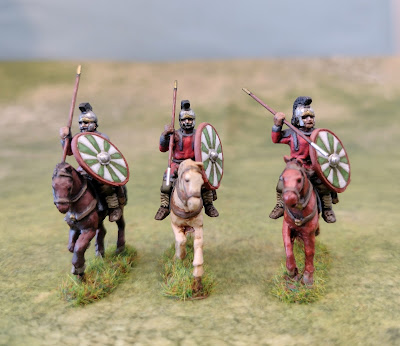 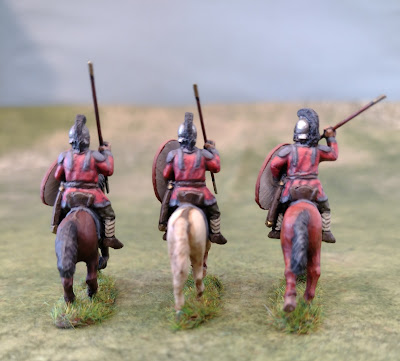 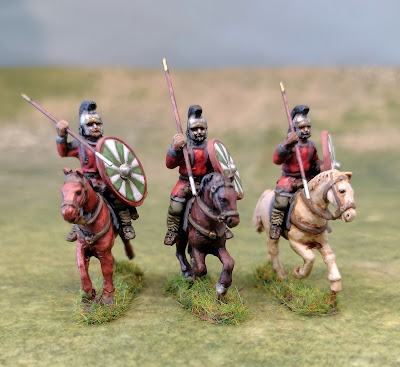 Legionaries
These have been available for a few years now and I love these miniatures. I will end up getting quite a few more and will make up some well equipped units in the "Dark Age" project not only as Romans but by swapping out shields or some simple greenstuff work I could use them as generic Dark Age warriors, even if its just a fantasy interpretation of my own. The third warrior is wielding a sword made from plasticard, originally I was going to give him a spear but the position of the arm was calling out for a sword. 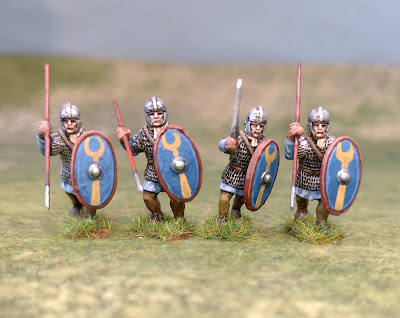 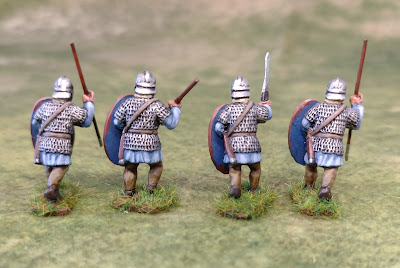 Overall some very welcome additions to the Late Roman collection and the light cavalry are well covered! I have the brand new General and Draco bearer set part painted along with the Roman Heavy and Gothic Heavy cavalry codes so the next sessions at the desk will be about getting them finished. Then the rest of the Roman and Gothic foot codes I have here will be getting done. If you like the look of these it's an ideal time to grab some from the 28th of Janurary  there is a 25% off sale running for the month I believe check out https://newlinedesigns.co.uk/ from that date to see.
Posted by Tony Emery at 12:41