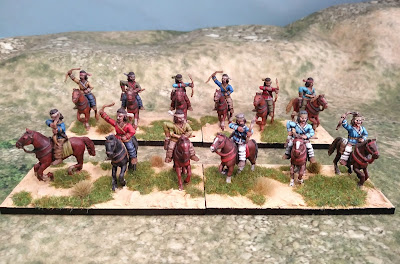 It has been a while, I hope that Santy has been good to all! I uploaded these pictures to the blog some while a go but unfortunately for the ancillary hobby tasks of maintaining blogs, pages and social media have had to take a back seat. Life has been challenging to the hobby and any time I get to hobby is spent on preparing or painting. I had completed I decent chunk of rebasing which has yet to be photographed and uploaded, these may well be the next few posts if I get a chance to get these sort of tasks done.
In the time since I last posted I have been slowly cleaning metal figures for the Roman Republic era and the Late Imperial Rome era. I am currently painting up some Late Romans samples not quite the full project which is still in the unfocussed buying and collecting phase, I love the miniatures of the era but I am not too clued up with the battles or tactics but I am inclined to using my Late Romans as generic "Dark Age" quasi historical battles, maybe more fantastical and possibly using Dux Bellorum. Still thinking on this but it will very much be a one the purists won't approve of.
I also have a great big box of Hero Quest stuff to paint for a friend which I hope to slot in between the next phases of rebasing and painting for the primary Republican Rome project. I also have had my head turned by the Lord of the Rings miniatures but beyond getting stocked up all the above has caused that also to be shelved bar collecting the sets that I would like to fill the gaps. I am very much in an argument with the precious as to whether we needs as much as what's on our shopping listses!
As the photos suggest the 20mm Newline Designs Parthian Horse archers have all been rebased. I was also very fortunate to receive some additions from fellow Newline fanatic and friend Elliott who runs the Newline Designs 20mm Painters Group on Facebook. They are lovely and I am chuffed with them but the fantastic highlighting has put mine to shame.
I am hoping then to crack through the Late Roman samples, take photos of the latest rebases and upload, do some of the Heroquest mission and then continue on with the Roman Republic project. With the move behind us I am hoping for a more productive year and to get a few games in but that requires a lot more rebasing to be completed. My hope for a more frequent upload of posts has yet to be realised but hopefully something improves with that also.